I was hoping that this would be my ever final update to the kitchen renovation series, but there will be a few more posts. I hadn't updated since the back splash went in a few weeks ago because there really wan't much to update. We were living off the microwave and the grill in a mostly functional kitchen.

But by and large, we are done now.

When we left off, we were still waiting for the stove. IKEA, it turns out, doesn't order things. You can get items when they're in stock, but if they're not in stock, you just have to wait for them to come back into stock. IKEA in Houston, it also turns out, is independently owned. Which means that the eleven stoves in Dallas couldn't be transferred to the store in Houston. So we had no idea when the stove was going to come in. We were told that it'd probably be about six weeks, but keep calling just in case. Of course, since the kitchen special was going on, everyone else in Houston that remodeled their kitchen with the idea of putting this stove in was also waiting. This led to a series of phone calls by both me and Graham every other day to IKEA. We'd ask if the stove was coming in. They'd say no, check on Friday. We'd hang up, dejected. We'd then call on Friday, and be led on until Wednesday. This went on for about a month.

There were rumors of a shipment of five coming in on Sunday the 12th, which led Graham to get up at 10:30 in the morning (after working until three) to call and be denied. On Wednesday the 15th, I heard about a possible single on a Friday the 17th shipment. I remembered about that rumor when I was at a work lunch with my colleagues on Friday. So I slipped away to the bathroom to call Graham to ask him to call IKEA. As we were driving back to the office, Graham called to tell me that there was one at the store! I gasped. Graham asked them to hold it for us. They said they weren't supposed to. Graham begged. They'd only hold it for us for an hour. Graham agreed. My boss asked if I needed to be dropped off straight at home, but since my car was at the office, we raced back.

It was the fastest trip to IKEA ever. We ran through the store, knowing the maze by heart by this point. And gasping, we were met some by amused IKEA staff who held our stove for us. VICTORY!!! It was delivered the next day, and Graham and I put it together and into place. 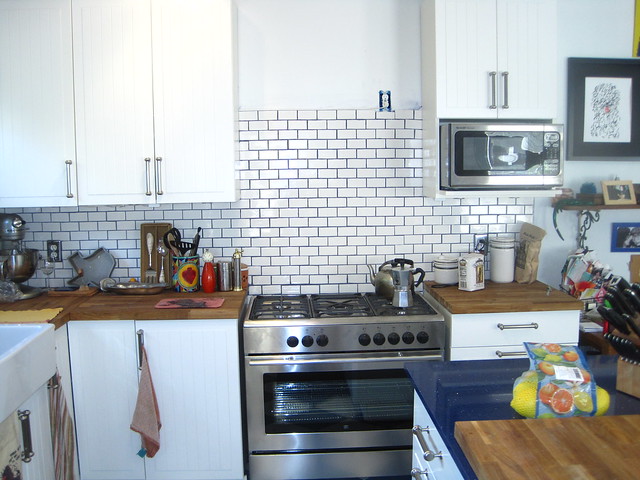 That weekend, we worked a little more on the backsplash tiling, but discovered we need a real tile saw for the job. But we finished the baseboards and the floor transition trim and the toe kicks.

There were some delays in getting the range installed, because our electrician had gone MIA and there were some problems with the 220 plug. Our super plumbers, though, were able to get the gas hooked up by Wednesday, and their dispatcher, who we've gotten to know very well, recommended another electrician. He came out and had everything up and running also on Wednesday.

In the meantime, our amazing, wonderful, can't believe how awesome it is counter top for the island arrived on Tuesday. It's such a pretty blue shade, and it goes so perfectly with the rest of the kitchen. The installers said it was the easiest job this month, as it's a single slab with no cuts or seams. 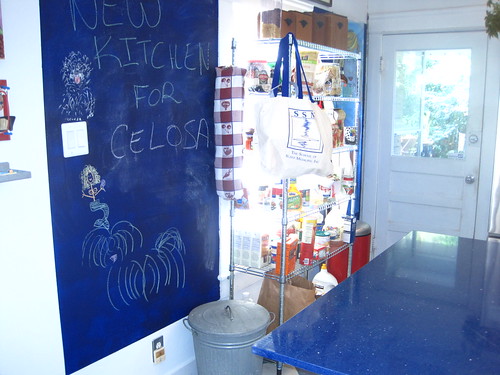 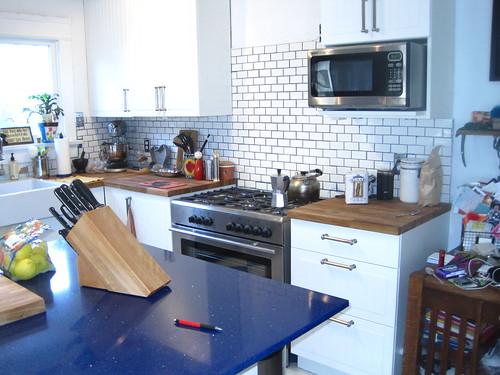 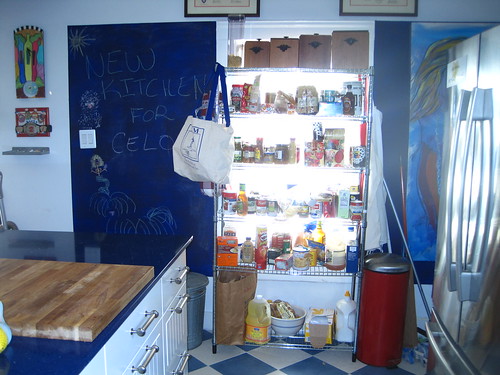 We had our first real meal off of it on Wednesday. Graham made pasta, which was one of the most awesome pastas I've had. And then on Sunday we went to the grocery store and Costco and spent hundreds of dollars on food, because we can now cook and are sick of eating out. We tested the oven on Sunday night with a pork roast and asparagus and mashed potatoes.

We hosted Geek night on Monday making fried chicken, mashed potatoes, and green beans. It was AWESOME to have a bunch of people over watching us cook. We could both work without getting in the way of each other. And we could interact with our friends who were on the other side of the island.

Celosa and Noir are pretty happy with the situation. Celosa HATED the kitchen at first. She left the house to stay with my parents on June 27 when it was the way she remembered, and she came back on July 29 with a totally different set up. She had trouble remembering that she couldn't go outside through the bedroom anymore, and she just didn't like that her house had been screwed up. But she got over it pretty quickly, and now I think she likes that she has a lot more room to run in the kitchen/living/dining room.

Noir has been watching the renovation since it started. He would come in and say hi to the workmen and ask for food in the middle of the construction zone. Now, he comes by for breakfast and sometimes he likes to just chill out on the kitchen floor. I think he likes the tile. Celosa likes Noir. 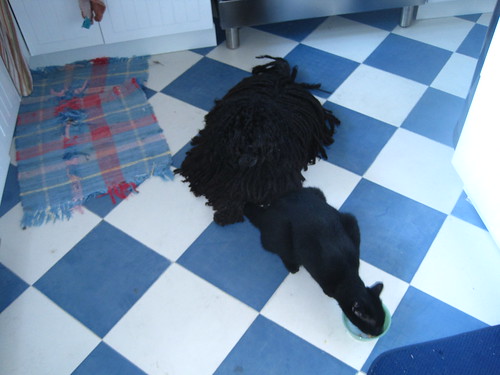 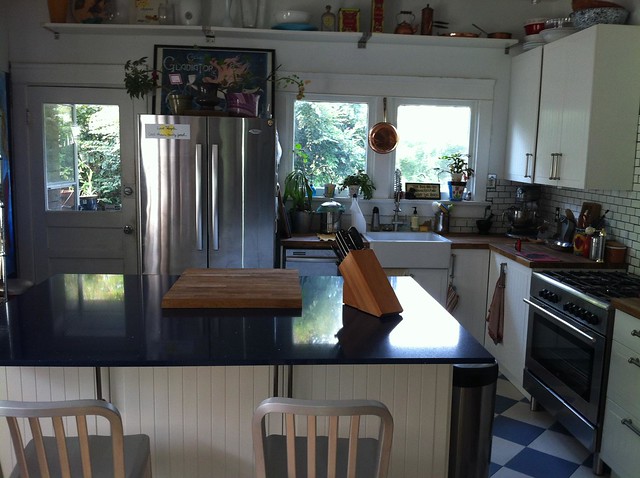 But for now, this will do.
Collapse