So when we left, we were hoping and praying that the electrician would come on Friday so we could move on to the next steps.

Graham nearly fired the guy, but I suggested that we give him the weekend. I had strong suspicions that he was doing our job on his free time, and his weekends were more likely to be free than not. Graham relented, especially when considering the cost of having someone else come in to do the job when it was halfway done. Not to mention it wouldn't be done any sooner.

So Graham, instead went to work on finishing up the drawers on the island. He installed the fronts and the handles, and it looked awesome. 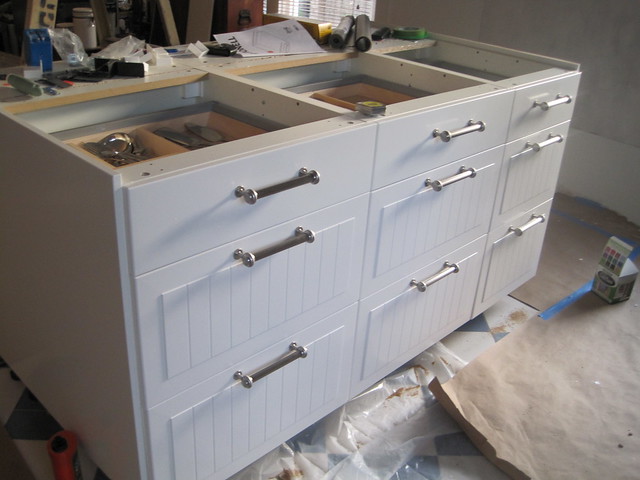 He went to work on Friday night, so I decided that I didn't need to wait for the electrician to start the painting of the chalkboard walls. I was nervous as hell about it, but I'd gone to Home Depot at lunch for some Frog Tape, and I had a level. So I got started. 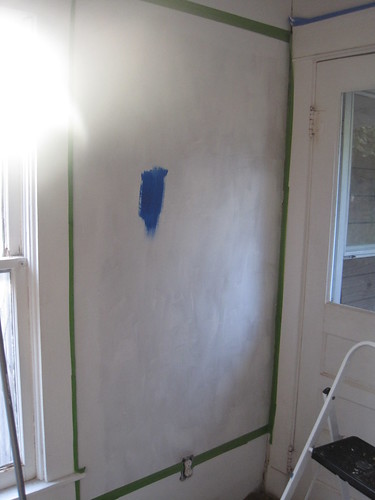 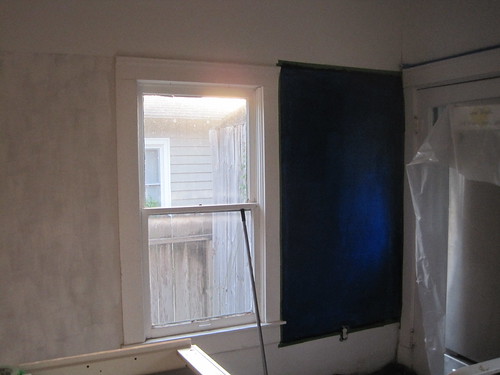 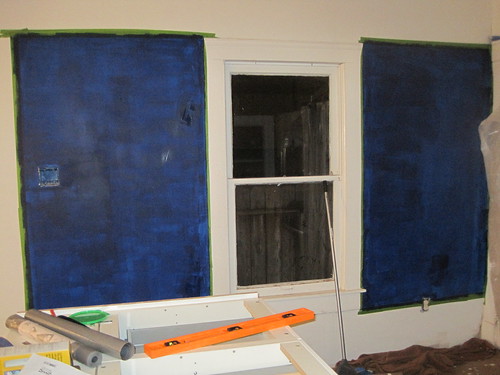 It was long, laborious work, but it was something that needed to be done. I didn't realize how many coats I'd need to use for the chalkboard paint to get on, but I totally got into the process.

I could have stopped to watch the opening ceremonies, but I decided that I'd rather watch them with Graham. So when I was done painting, I started organizing some of the crap in the living room into the drawers that had finally been installed.

Graham got home sometime in the middle of the night, and we slept until maybe nine, because the electrician had said he'd be by at 10:30.

We watched the opening ceremonies while waiting for him to come. And when I called at 11:00, he said he'd be there in an hour. And at 12:15, he showed up.

He worked for four hours, and installed eight regular outlets, one 220 outlet and one light switch. He also connected the dishwasher and disposal.

Since there wasn't much for us to do while he was working, we watched Olympics. Fencing, beach volley ball, regular volley ball, and some other random sports. The iPad app is pretty cool for finding Olympic coverage.

Because of the delays, his charge for the electrical bill was embarrassingly low. Like, ohmigodican'tbelievethis low. But it was excellent work. The installation of the outlets in the island (including one with USB ports, so plug space isn't taken by Apple products of various vintage) was outstanding. As much of a pain in the ass as his communication skills were, his work (and his cost) was amazing.

When he left, Graham and I did a bit of a happy dance, and then we high tailed it to Home Depot to buy some 3/4 inch cabinet grade plywood decking for the island. I also picked up some trim for the floor, though it turned out to be the wrong size.

And then we went home and went to work. The decking had been cut PERFECTLY at Home Depot. And even better, the side panels on the island that tested the strength of our marriage the week before was installed AMAZINGLY well, by the two of us. And we now had a working island. We put the laminate strips on the edges so it'd blend better, and until the Silestone shows up sometime in the next two weeks, it will be very functional. 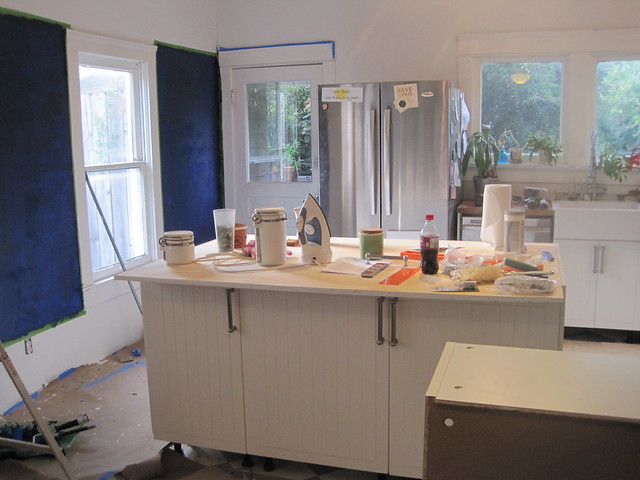 Then, Graham and I went to work on separate projects. I started a second coat of paint on the chalkboard walls, and also on the accent cut out in the dining room. It had been a different shade of blue that was going to clash, so I thought it'd be easier just to paint everything the same color. 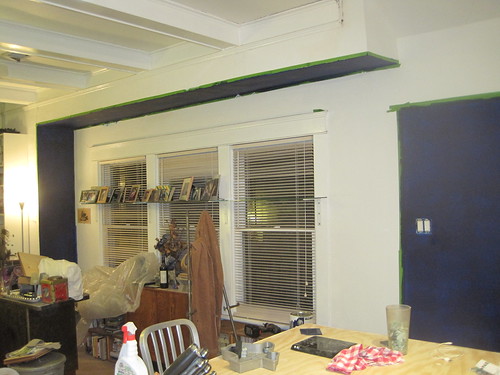 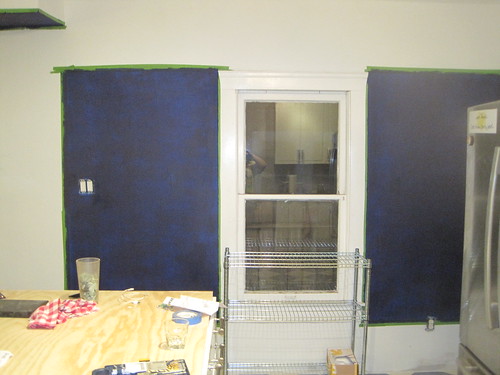 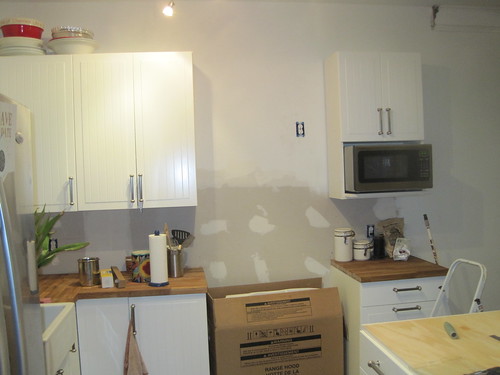 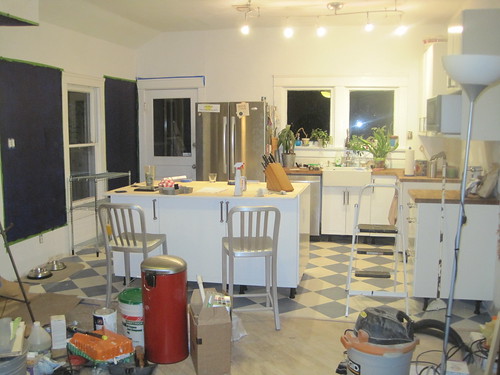 We also started moving stuff into the kitchen. Plants on the windowsill, appliances on the counter tops or in the island. Drawers got organized. We started making a lot of decisions about how we were going to live.

We stopped at around 9:00 and got something to eat while we watched Olympic coverage.

We were up pretty early. Graham was overjoyed that he could actually make coffee using the microwave and a French Press. I was just happy that things were moving quickly.

We did some more organizing in the morning. I pulled the tape off of the chalkboard walls. Graham moved some more items and pulled the paper and plastic off the floors. It was starting to look real. 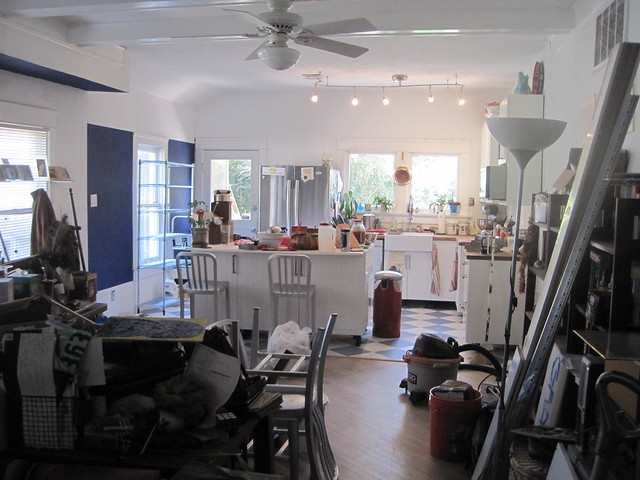 As soon as 10:00 rolled around, we hopped in the car and took off for IKEA. Our mission: shelving for over the window and under cabinet lighting.

Actually, we had a pep talk about the shelving before we left, and it turns out that we had been on two entirely separate pages. Fortunately, we talked it out and went in with a game plan.

By now, we know IKEA pretty well, and we knew exactly where to go. The lighting turned out to be slightly more expensive than anticipated, because we will end up using two systems instead of one. But one of the things we noticed the previous night was that the under cabinet lighting will turn out to be necessary. And of course, I wanted the color changing LED.

Shelving wise, Graham had an epiphany, and instead of broken up shelves over the window and the refrigerator, he created a long shelf over the whole wall. It's just brilliant.

We met some friends for brunch, and then took them home to watch us install shelving and move into our new pantry. We were really glad that they came over, because we could really see how functional the kitchen was for entertaining while working in the kitchen. Very easy to chat while doing other things, and our guests were comfortably sitting at the island while we worked. 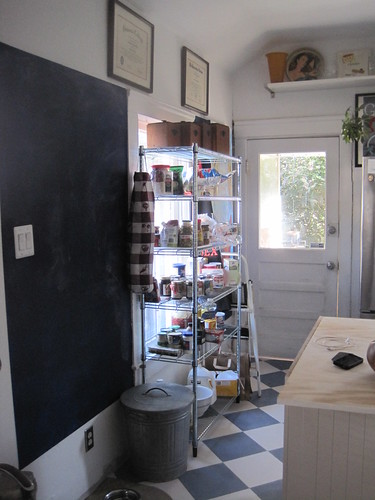 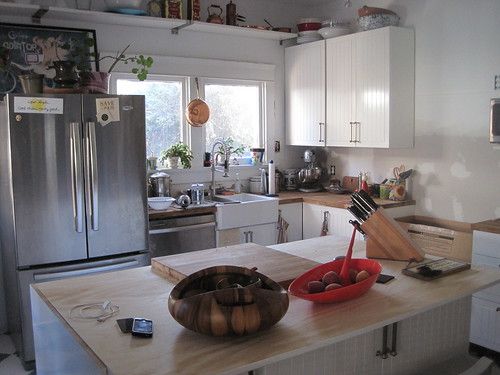 After they left, Graham and I went into hard core cleaning mode. I hung art. Graham scrubbed the hell out of the tile floors and the wood floors right next to the kitchen. I moved as much as possible from the living room and dining room to the kitchen, cleaning as I went. Graham helped me repair my desk, and then we moved it to its new space. I flipped the sofa and the chairs in the living room. Graham installed one of the lights over the coffee station cabinets.

Our goal was to get the house as ready as possible for Celosa, who would be coming back from the ranch that night. I went to the recycling place to take all of the boxes off of the front porch. I loaded the car with all the crap to take to Goodwill.

My parents got to our house around 8:00ish, and Celosa raced into the house. She wasn't really thrilled about the idea, especially about the door being cut off from our bedroom to the kitchen. She now has to go all the way around to go outside from the bedroom (though that will change sooner or later when we install a patio door in the bedroom).

Graham cooked steaks on the grill last night, and he made some veggies in the microwave. It was our first meal prepared in our new kitchen.

And this is what the house looked like right before I left for work this morning: 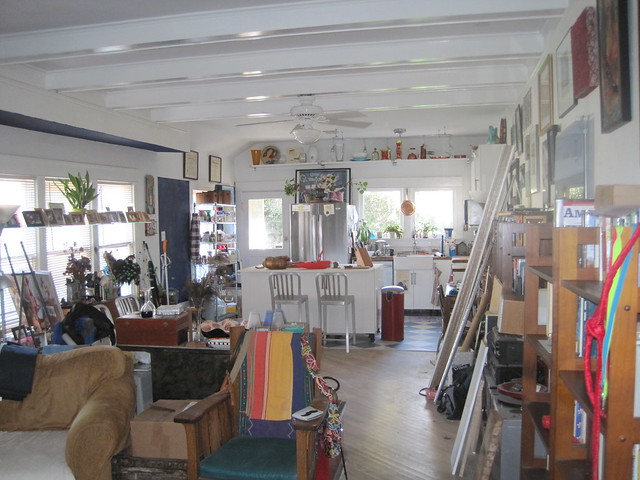 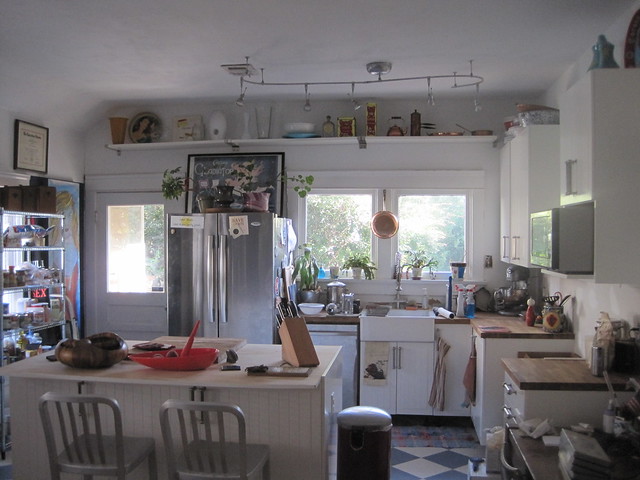 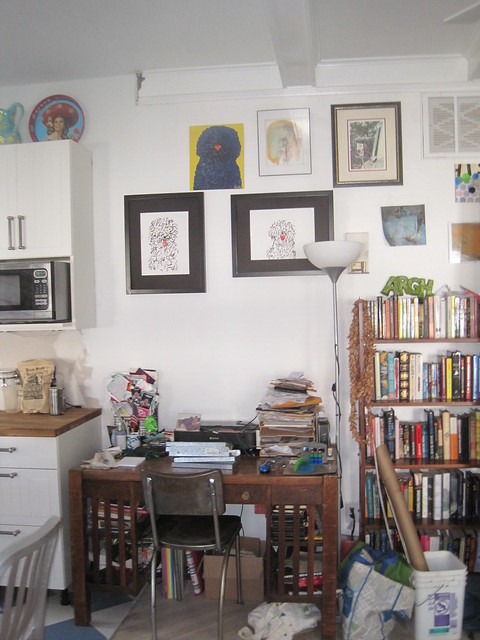 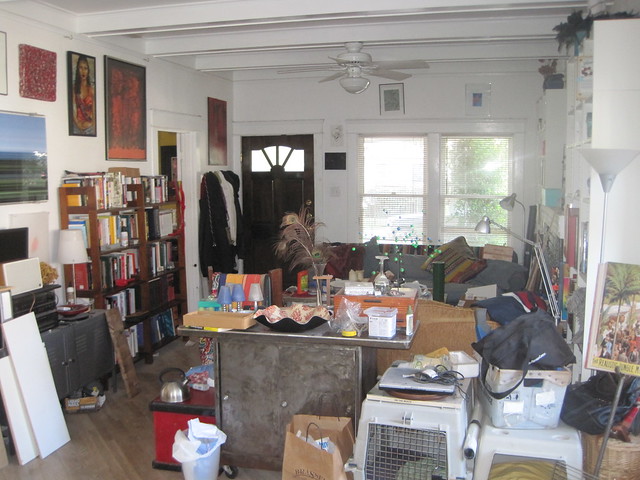 So it's almost done. We still have to wait for the countertop and the stove. And when the stove comes in David will come back to install the hood. And while he's here, we'll use his truck to pick up a dining room table that my parents want to give us.

And we still have some projects to finish in the next week or two.

1. Backsplash.
2. Under counter lighting on the other side/
3. Toe kicks (and install trim between dishwasher).
4. Move overhead lights and add rail.
5. Floor transition board.
6. Base boards install.
7. Upper trim install

But holy crap is this thing different than when we started! 29 days ago they took out the cabinets, and now this. It feels like a whole new house.
Collapse