So Graham had jury duty today. And the electrician--who neglected to show up on Monday, Tuesday or Wednesday--was supposed to show up at nine. So I informed my boss that I'd have to stay home for awhile this morning.

And Lo and behold! Raul was here at 8:55 this morning. Graham showed him what to do, kissed me, and took off for jury duty.

I held down the fort for 30 minutes, while Raul cut away at the drywall (but not the shiplap underneath). It was not an overwhelming success. At 9:40ish, he told me he had to get some supplies and check on another job and he'd be back at two.

I went to work.

Graham got out of jury duty (he kept on stating "It depends on the eccentricities of the case" to every question asked of him), and got home in time to wait for Raul.

There was a lot of gnashing of teeth and some foul language, because really, we could have a functional kitchen if the electricity were done. We could put the drawers in the island and fill them. We could put the microwave in its cabinet and the items that are destined for that cupboard. We could buy the plywood decking for the island and install it. We could work on the tile backsplash.

So at four, I went to the paint store for the second coat of paint for the walls and ceiling, and Graham cut out the holes in the wall for the outlets (including the shiplap) to be moved. 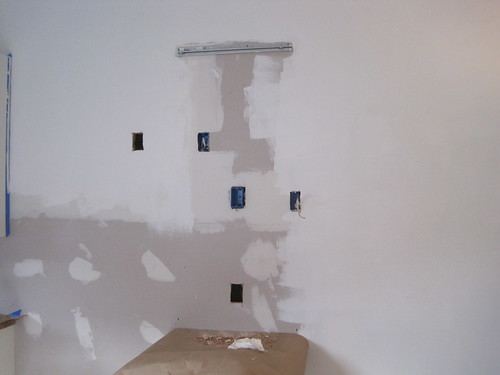 The two boxes with wires are the ones that don't work. The three boxes without wires are Graham's new holes. After the electrician installs the outlets, Graham will fill the other holes with drywall and mud.

And then we got to painting. Graham had already put the first coat of this thick texture paint to attempt to match the paint on the rest of the walls. This paint was regular flat latex, and it was awesome.

Graham took one side of the kitchen, and I took the other, and we got the entire first coat on in about an hour and a half, save for the parts that were still wet from Graham's texture coat that went on earlier today and the taped away chalkboard planes. 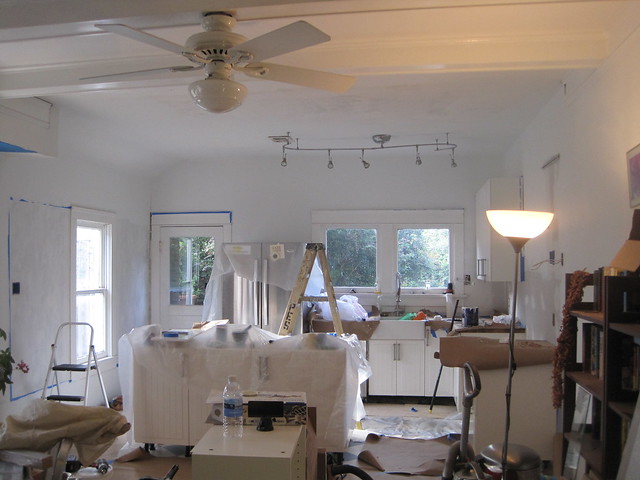 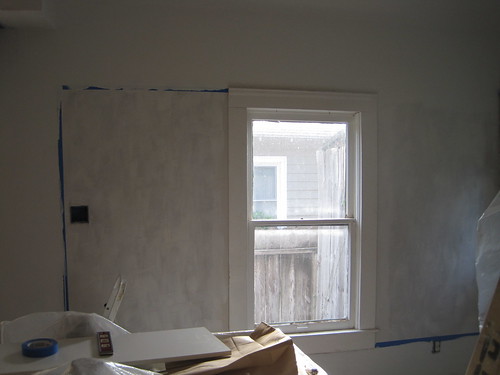 The parts of this wall with just primer are going to be covered in blue chalkboard paint. I also contacted my friend Melissa Borrell about one of her Fantasy Shades for the window, since it looks upon my neighbor's fence, and it's a west facing window at any rate. She e-mailed me back with some ideas, and I think it'll end up looking really cool. 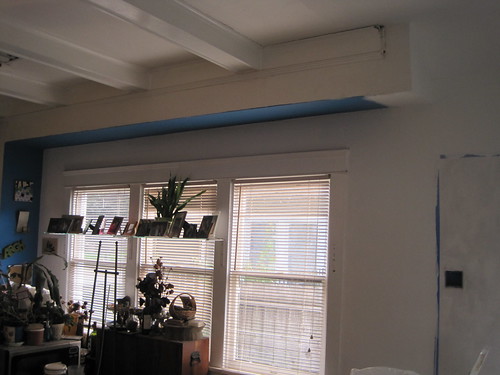 We also realized early on that the blue on this accent wall was likely going to clash with the blue of the chalkboard paint. And at any rate, the likelihood of matching the old paint for the extra part that was added on to the soffit (my brother informs me that is the architectural term) was going to be low. So we're going to repaint the old blue with the blue chalkboard paint to ensure that the clashing is minimal and to add some continuity between the rooms. 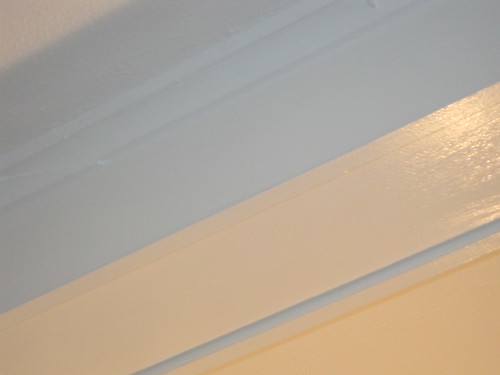 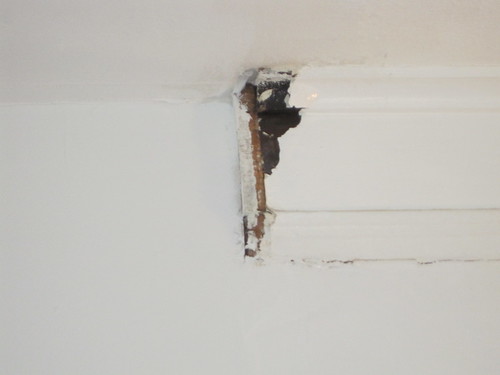 I continue to take pictures and measurement of trim. We're coming closer and closer to actually needing to think about how we're going to do this, especially now that we have started to paint the ceiling. I'm pretty sure that we now know how we will make this work, but it will be tricky.

And so the plan for the immediate future is: 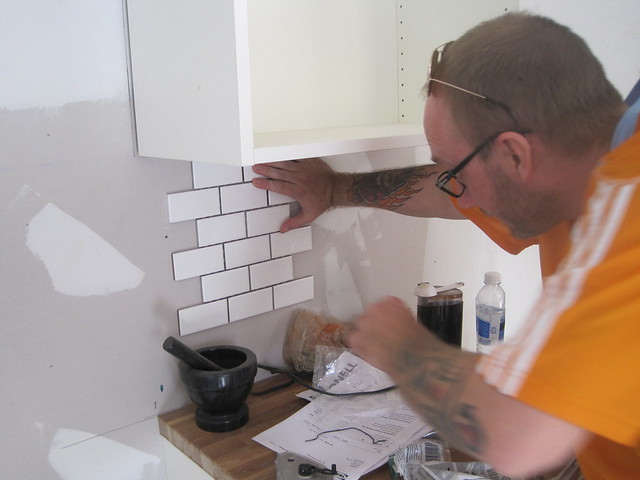 This is what the backsplash will look like. It's going to have blue grout.

After all of this is done, we'll get working on the various trim pieces (base boards, transition from tile to wood floors, the beam on the ceiling, then paint all with glossy latex). And then we'll scrub down the various floors, apply sealer on the grout.

And then we're done!!

We're at 3 and 1/2 weeks now, which is pretty damned fast, in my estimation. I think that we'll be done with most of it by this time next week, except for the two items
Collapse