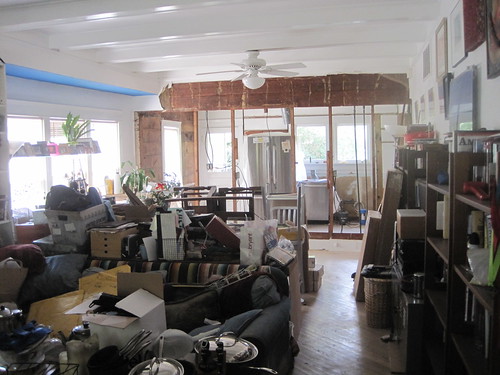 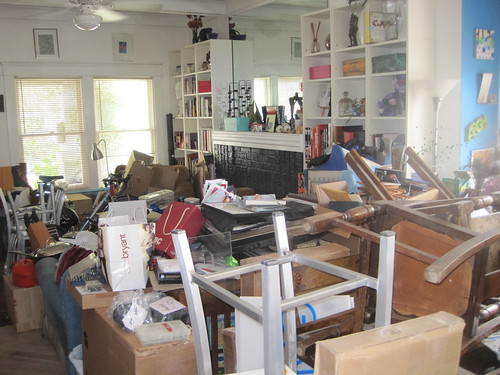 So we continue to live under less than neat and tidy conditions.

We were awakened by David, who had an electrician lined up to see the house. We hauled our asses out of my parents' bed and tore over to the house to meet Raul, the electrician. His quote was about a third of the other quote. He'd be moving all the wires and replacing the panel. And? He could start tomorrow, Sunday. Holy fuck! Graham and I were in a bit of shock over that, but we were more than happy to hire him on the spot. Graham called the other electrician who was supposed to show up on Monday for a bid to cancel that appointment.

Graham had worked on Friday night and he woke up early Saturday morning, so I made him go back to my parents' house for a nap while I worked a little more at the house. 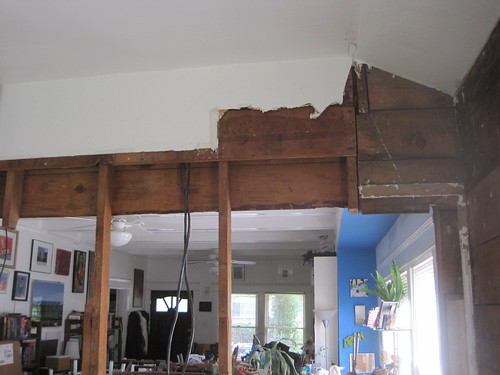 I pulled off one more layer of shiplap, and then I went to the task of arranging all the shiplap we had already taken off. It took me about an hour to pull out all the nails, and then I organized all the pieces in to like sizes and tetrised them into our tool shed.

I also went to the backyard and took the opportunity to cut some major branches off of some overgrown trees and bushes and hauled them to the bagster sitting in our driveway. We could barely walk out of our back deck thanks to an over eager loropetalum, and the vitex was pretty much depriving my rosebed of sunlight. A casual passer by would think that it was yard work rather than house work that was the impetus for buying the bagster. I arranged for it to be picked up on Monday. 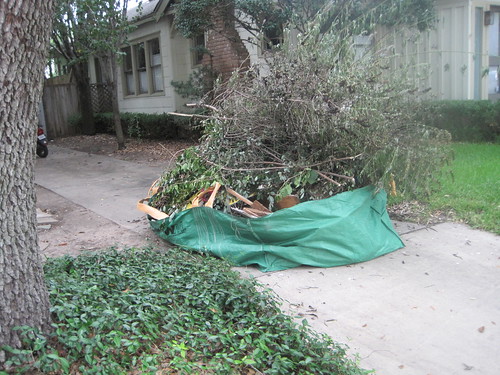 I went back to Graham, took a shower and had a nap until it was time for him to go to work. The puppies were overjoyed to see me.

Sunday
On Sunday, the electrician was supposed to be there by ten thirty, so we hauled ourselves out of bed again and went over to the house. I occupied myself by getting rid of the trim around the doorway in our bedroom. And I pulled away all of the remaining wood on the floor where the wall used to be, uncovering the original hardwoods of the house. 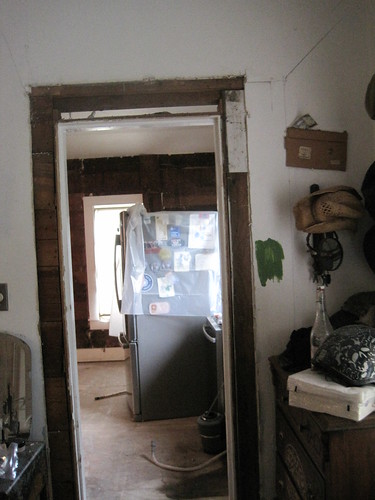 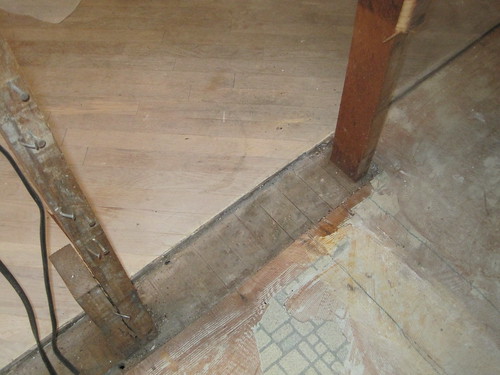 We had a three second discussion about uncovering the rest of the hardwoods, when sanity prevailed and we realized that the original tile idea would be better. I cleaned a bit of the area, too, because I knew that the plumbers and electricians would want room to work. I stacked all the trim away, in case we needed it later. And I swept like a madwoman. 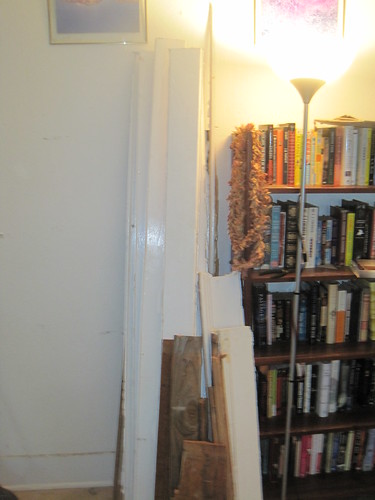 By noon, it was raining pretty hard, and the electrician couldn't get what needed to be done in the rain, so he rescheduled for the next day.

So we took off for IKEA to get some recon regarding the countertops, any impending supply issues with the cabinets, and to look at shelving for over the refrigerator. All seemed well, especially since the sale is going on now, and we're in the wonderfully awkward position of having to find $200 more to spend at IKEA on our kitchen so we can save 20% rather than 10% (we're in the window where spending more actually saves us more). I have confidence that we can do this.

And on to Home Depot! We decided to buy a hot water heater. I have delayed this purchase ten years, and since the plumbers have to disconnect it anyhow, we figured it was a good time to replace it. We had a Home Depot gift card from the wedding that we used for part of it, and Graham nearly killed me by vandalizing some inventory notes in the patio door section.

We grabbed some lunch at The Haymerchant and headed back to the pooches. My parents got back from California a few hours later, and they wanted all of the updates. We decided that Graham would stay at the house because he had contractors to deal with the next morning, but I'd stay at my parents' place with Celosa.

The electrician was supposed to be there at around one. But again with the rain, cancelling.

The only real success of the day was that the Bagster was picked up and our driveway is navigable again.

We went to geek night last night, and then parted.

Much success! I don't know much of the details, since I was only on the phone. But!

Plumbing: Pipes moved! Apparently this was quite a challenge and involved a lot of going to the attic and under the house and pulling apart the one unmolested wall in the kitchen.

Electrical: Rough in done! Apparently there are all sorts of new connections and wires and things running all over our kitchen, and we're terribly excited about all of it. As I type, the electrician is putting in the new panel.

Drywall and tile: Materials ordered! Home Depot will be delivering 14 sheets of drywall, 10 sheets of mortar board, assorted screws, thin set, and liquid glue in the morning. Should be moving forward tomorrow!

I'm about to take off to check out the progress today. I look forward to seeing how it's going. Tomorrow: The return of David, and drywall goes up.
Collapse