So according to plan, the plumbers showed up bright and early on Monday morning to disconnect everything. Shortly afterwards, the guys from Habitat for Humanity came, and they began the process of pulling out all the cabinets. Apparently, it wasn't terribly difficult to get everything out of there, though they didn't have a truck to take everything away. They dragged it all to the backyard instead. Graham was home for all of this, but I was at work, so I only heard about it on the phone and through occasional text photos. Though I did go over to the house on Monday night to see the cabinets gone. The only thing that was left in the house that still needed to be hauled out on Monday was the stove and the upper cabinets over the window and refrigerator. 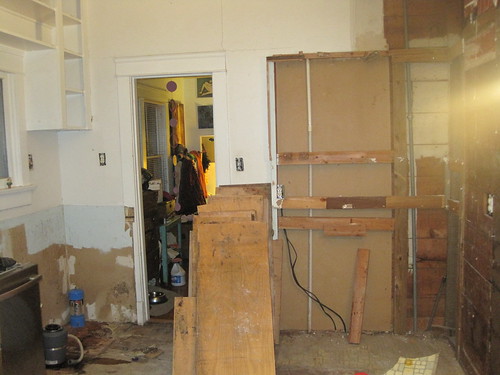 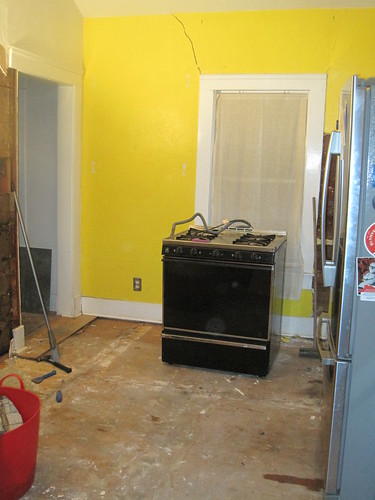 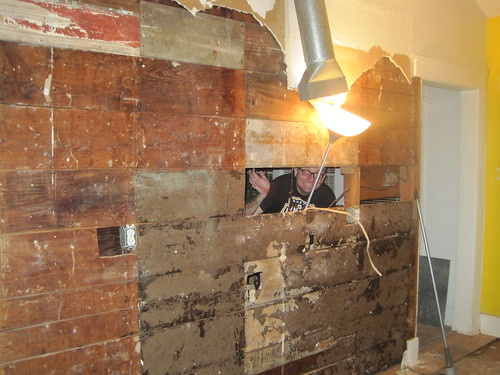 While we were there, Graham pulled up the rest of the floor boards, and I started working on some of the shiplap slats on the kitchen side of the wall. I finally pulled a slat that allowed us to see through the wall.

On Tuesday, the electrician showed up and walked through. The job seemed straightforward enough, but since it's probably been at least 20 years since the wiring was put in, it's woefully out of code. And so he'll need to rewire the circuits in the kitchen before he can move anything. Plus, our panel is pretty bad, so it'll have to be replaced too. He's supposed to send the bid by Friday.

The Habitat people came back also to take away the stuff in the back yard and pull off the remaining shelving. Graham said that job took as long as pulling out the rest of the kitchen, because the shelving was built into the wall, past the sheetrock. It was sturdy, too. Sad to see it go, but we would lose significant upper cabinet storage if we kept it.

I didn't sleep well on Tuesday night because I started to worry that maybe we screwed up by not getting permits to take down the wall. You don't need a permit to change floors or wall coverings or cabinetry, but you do need them for electrical and plumbing jobs. At some point, inspectors are going to have to come in to check work.

The wall we're taking down is not load bearing. It's been messed with already at least twice now, once when they moved the door from the middle to the outside wall and once when they put in the cabinets and reinforced the cabinets. I even think that the middle door wasn't original, even though it's clear that it was pretty old. There are only six 2x4s holding up 14 feet of ceiling, and there isn't a beam at the top, just the shiplap ceiling in the attic. The joists holding up the roof are attached to a beam going up and down the middle of the house, perpendicular to the wall we're taking down.

I didn't know all of this on Tuesday night, but I did know most of it. The city isn't going to care much about homeowners taking down a non-load bearing wall. But they would about load bearing. I talked to a general contractor friend who will totally help us if we do run into permitting problems, but she thought that this is a "ask for forgiveness if someone asks about it" problem rather than a "oh god you're screwed" problem.

When we got to the house yesterday, I was in full "check out the wall" mode. So I took off more shiplap, and Graham got the door frame out. The door frame was totally floating, and we were overjoyed to see nary a beam in sight. We worked for about three hours, and I was able to get almost all of the shiplap off on both sides. I want to take one more layer off on the top, leaving two boards to help define the transition from the dining room to the kitchen. Graham got all of the kitchen floor out. 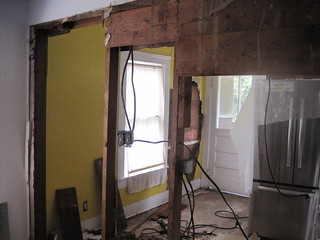 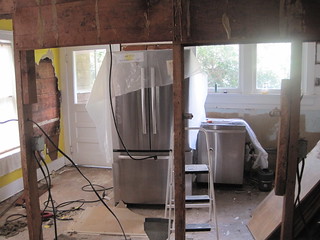 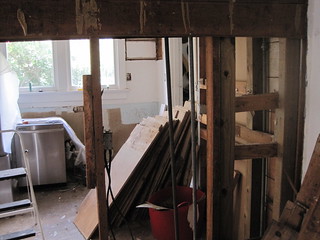 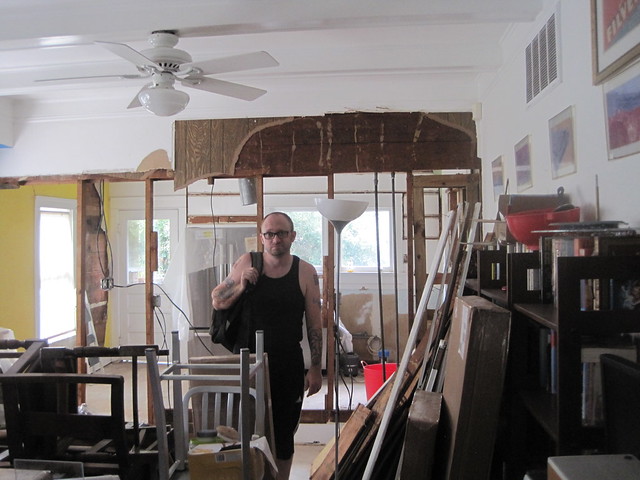 We were out of there by about 3:30, then we went to the grocery store to pick up patriotic food for A Very Special Geek Night at my parents' house. And our friends hung out with us from about five thirty until midnight.

This morning, Graham was back at the house, and he got all of the sheetrock off the yellow wall. We're in the middle of a little debate about whether we want to recover that wall or keep the shiplap exposed. I'm on the "exposed" side, but Graham likes the original plan of re-drywalling and painting with chalkboard paint. It's as of now unresolved, but I'm going to try to sand a few planks to see what they look like. The plumbers came by again to take a look at all of the now exposed pipes, and they're scheduled to move everything on Monday. Graham also got all the trim off of the door heading into the bedroom. We're still waiting on the electrician quote, and we have no idea when they'll be scheduled.

David gets here tomorrow, and he'll work first on re-leveling the house. The challenge after that is how to work without having the other contractors do the rough-in first. He's supposed to tile the floor, but we're having electricity in the island, so that'll need to be roughed in first. Same with almost every wall. Even the missing wall needs to have electrical wires addressed before it can be made to look pretty. We're really hopeful that the electrical is a) reasonably priced, and b) can be done quickly.

This is the Flickr set dedicated to the kitchen renovation. I'm hopeful that it fills soon.

In today's adventures of home renovation, David came with his son and a friend to level the house. It was quite exciting. Our house had sunk in various places as much as six inches. In Crianza's puppyhood, there were always these trails of pee flowing away from the scene of the crime. Graham was always having to level cutting boards when he cut anything on the countertops because juices would flow towards the corner of the kitchen. But with some jacks, some shims, and a lot of patience, the house is in much better shape than it's ever been. Both the front and back door can open with ease. Water doesn't run towards the middle of the house when spilled. Window sills look like they are straight. It's pretty cool.

Also, we got our first "holy fuck!" bid today. The electrician bid came back at twice as much as we had anticipated the very top to be. Fortunately, another electrician who came recommended by a friend is coming by on Monday to take a look, and if that doesn't work, David has an electrician friend here in Houston who he says could probably do the job for about a quarter of what the bid was. David of course could do it for about a tenth of the bid, but he's not a certified electrician (though I have no doubts whatsoever that he'd be well above code) and we want this to be as above the books as possible, he's not going to make the cut.

The plumbers are coming back on Monday to move the pipes. They told Graham yesterday that it'd be a little more than anticipated, now that they've seen the extent of the job and that they have to thread the pipes through the shiplap retaining wall. "How much more?" "$200 more." I heart our plumbers.

This weekend, we are going to finish taking down the shiplap from the main wall. I have two more layers to go and that part is finished. Then I'll move it over to the tool shed for safe keeping until we have a project for it. We will also remove as much of the sheetrock as we think is going to be needed to be gone for the renovation. Maybe we'll be able to get the other door frame out too.

Our other task for the weekend is to determine whether or not to replace the hot water heater while we're at it. I'm sort of inclined to given that they're messing with those pipes already, I was supposed to replace it ten years ago when I bought the house, and we've saved a lot of money already on this project. Plus, sometimes I hear rattling in the attic when I turn the water on. If so, we need to buy the hot water heater this weekend so they can install it on Monday when they do the rest of the plumbing job.

Monday and Tuesday are supposedly the rough-ins on the plumbing and electrical (assuming that one of the two people coming in on Monday can move that quickly on electrical) and on Wednesday, David is coming back for the drywall and tiling. We think we have a pretty straight forward drywall job, and the tiling will just be the whole room, which is pretty square and won't require too many strange cuts, aside from two holes near the island for electrical outlets.

Next week, I'll need to buy a bunch of drywall, some insulation sheets, tape, drywall mud, drywall screws, backerboard for the tile, mortar, grout, sealers, etc. Right now, I'm estimating about $700 at Home Depot, but who knows what random unexpected purchases I'll be making in addition to what I'm expecting.

Sometime the week after, we'll make the IKEA buy, grateful that their Kitchen Event sale started on Wednesday and will go until mid-August. And the installation of cabinets will begin! After that, we have to call the countertop people to install that, and while we wait for that installation, Graham and I will work on the backsplash.

Then paint, touch ups and finish work, and we can move back into the kitchen! I'm guessing it will be five weeks total, though we're hoping for four. Week one has been EXTREMELY productive, even with the holiday that sort of screwed us contractor-wise in the middle.
Collapse