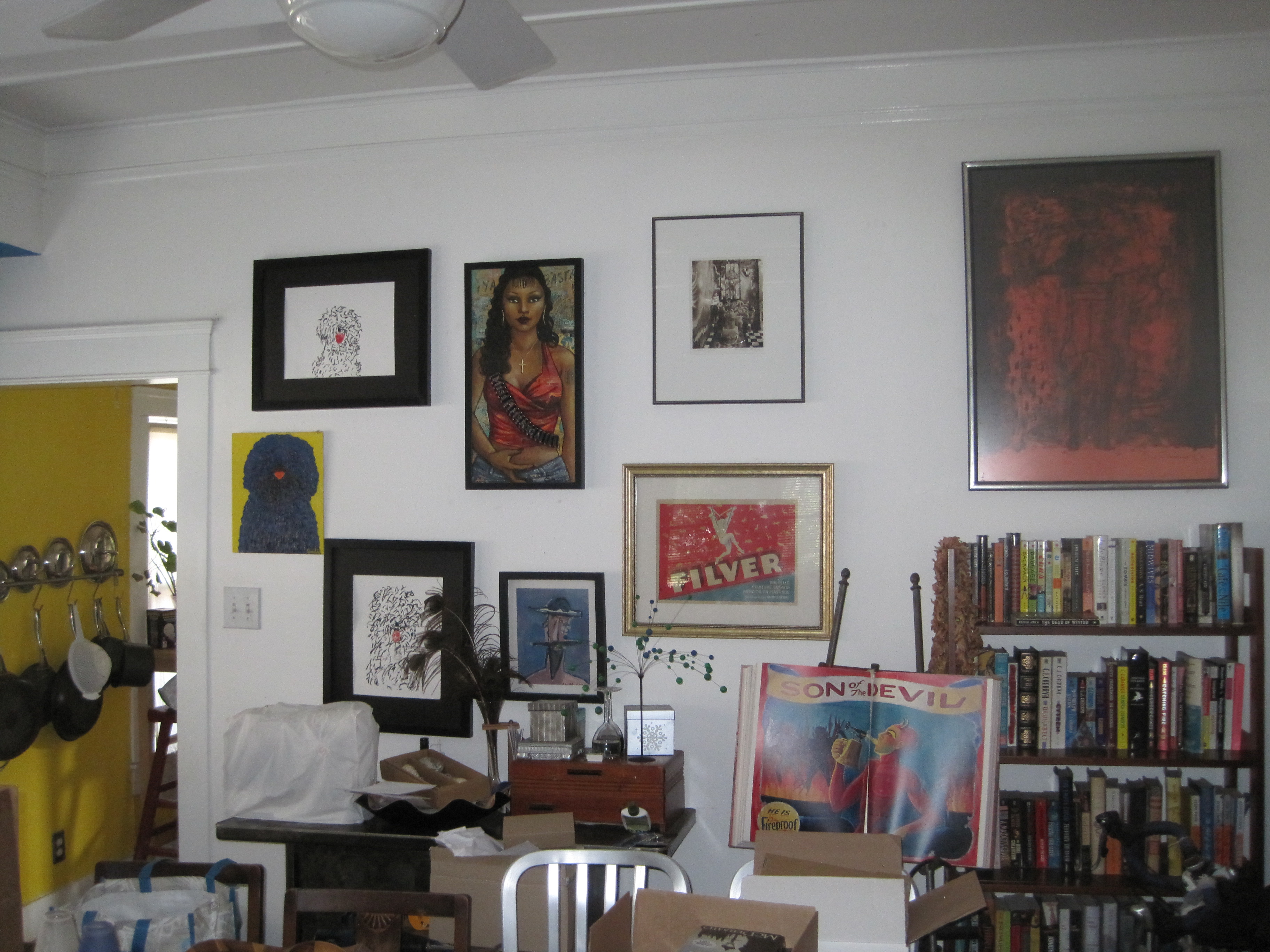 The dining room wall before it was stripped. This will be gone. 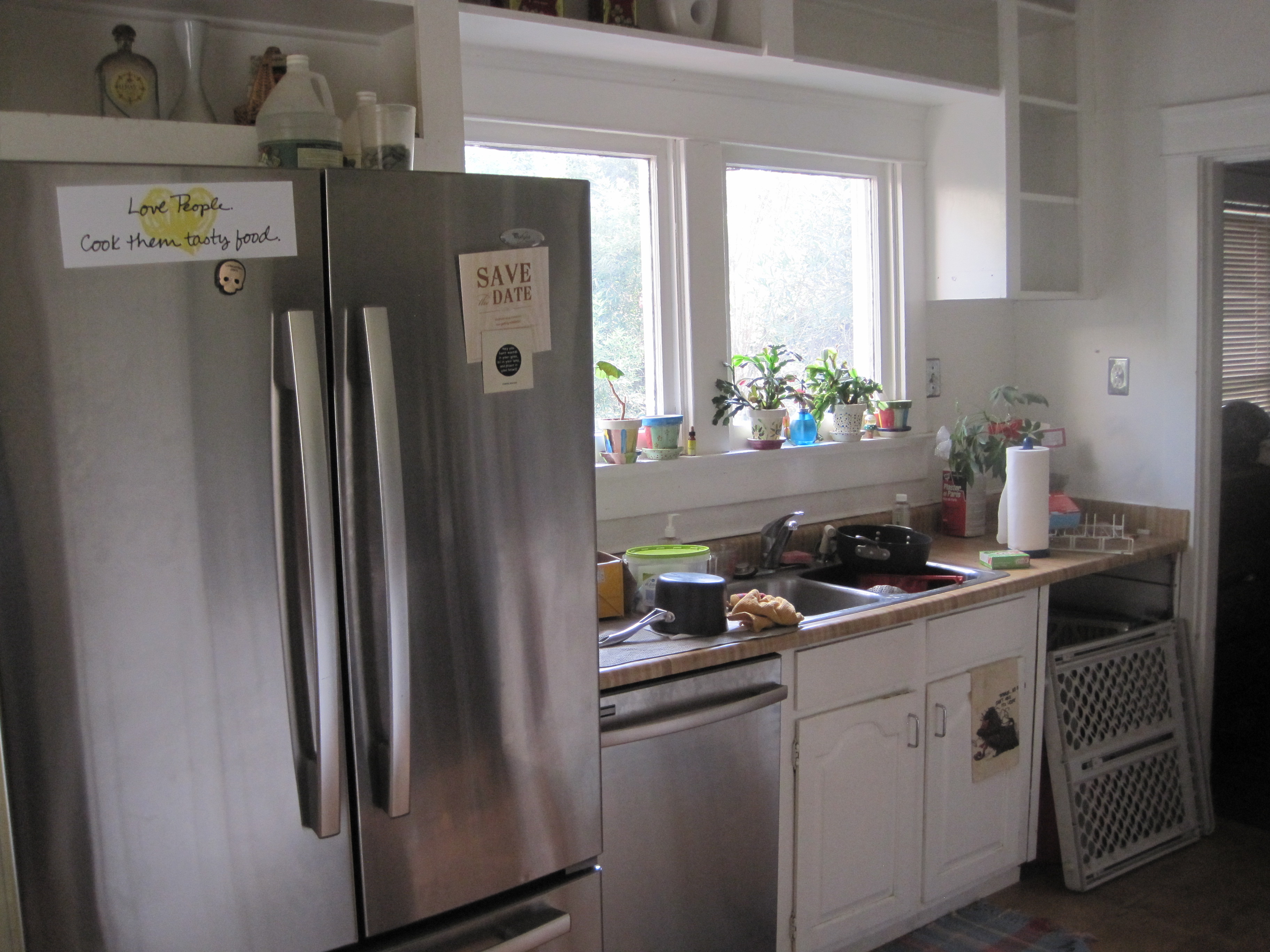 The only appliances that will be staying: fridge and dishwasher. 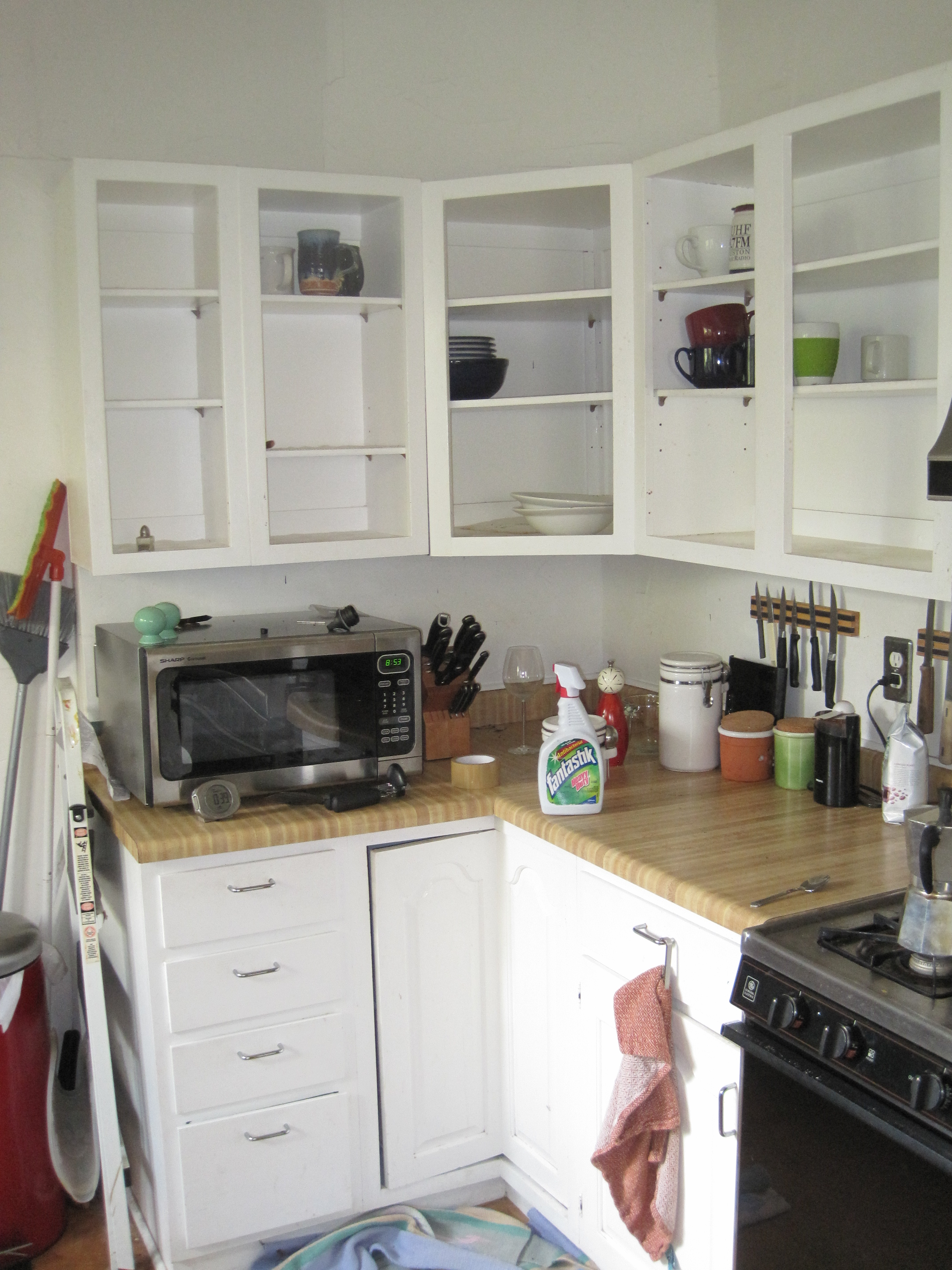 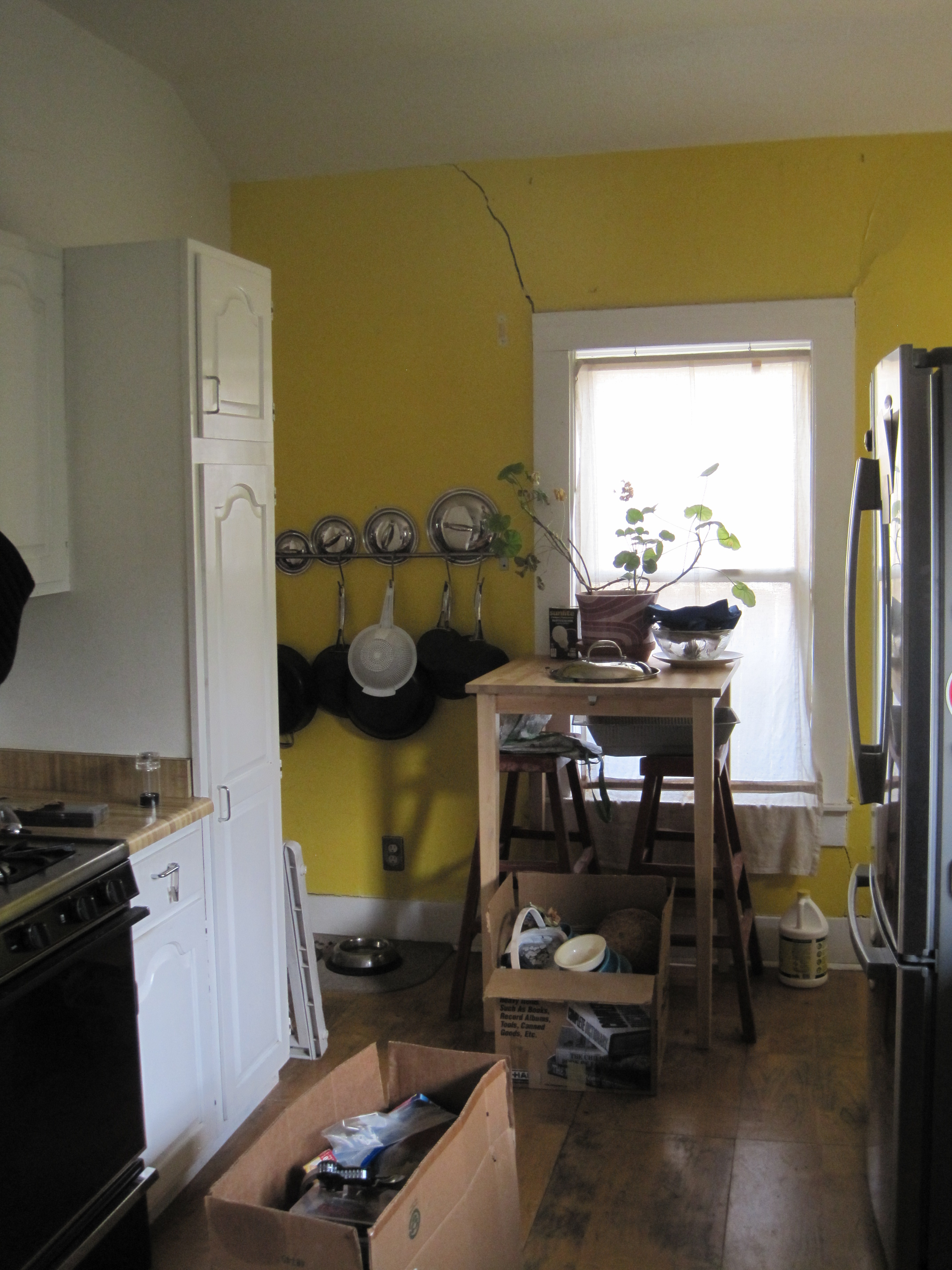 This is what everything looked like before we started demolition.
Today, we met with David, our manager at the ranch, to talk about what we wanted done. He's going to level the house, install the floor, and redo the drywall. He took a look at everything that we're planning to get an idea of the job and tools and materials to bring with him, and he's coming back on Thursday to start with the house leveling. He thinks that the major problem is the middle of the house, which makes since given that's where the major retaining wall is and that's where most weight is headed.

The meeting was pretty straightforward, and because David wants to see everything stripped before making any decisions about how much of anything to buy, we didn't start making any definite shopping lists yet, though I've started a preliminary list that is mainly drywall and floor tile based. Tomorrow, the cabinets and sink and stove and old vent leave to their new home with Habitat for Humanity.  It's a great deal.  They haul it away for a fee, but we get a tax deduction.

Before he got there, I started working on a small hole in the drywall on the dining room side so we could show him both sides of the wall. After he left, I started working on it a little more. Graham thought that my screwdriver with hammer method of chiseling wasn't as effective as using a prybar, so he started working with that tool. I started worrying that Graham would start hurting the wood underneath, and I'm pretty keen on saving as much of that as possible.

He got a good piece off, and then he started laughing. I yelled "destroy it! destroy it!!" 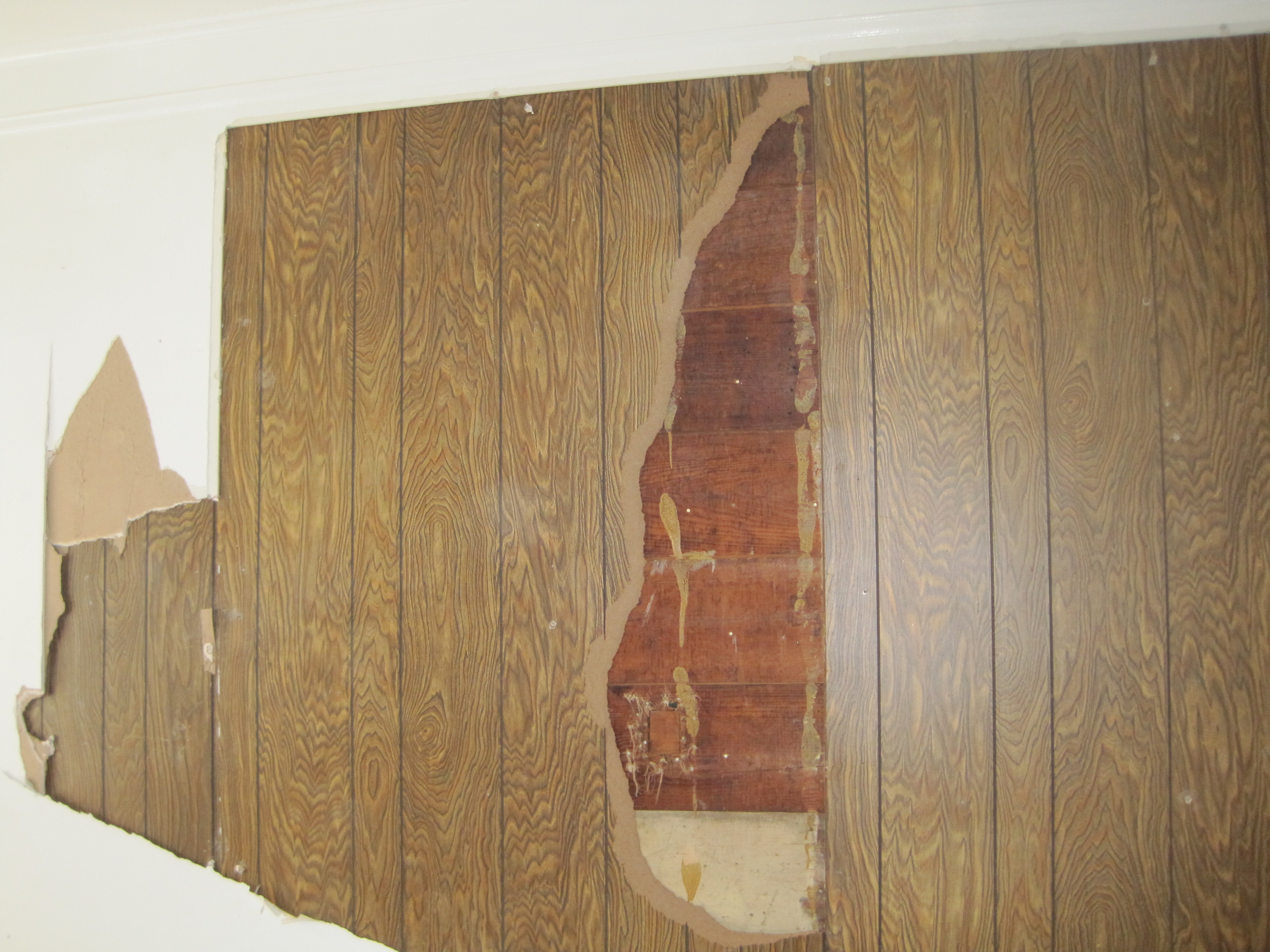 Yes, that is 60s/70s era paneling under the 80s/90s era Sheetrock and above the 20s/30s era shiplap.  Graham commented that with the disco fireplace, there is enough evidence to support the idea that key parties probably happened at our house back in the day...

We started pulling off the Sheetrock and the paneling.  It actually got to be kind of fun, and we got a much better sense of what we are up against.  The paneling was glued and tacked on, but it's easy enough to pull off once we get under it. The Sheetrock is almost easy to pull off. We got nearly a full 8'x4' sheet to come off in one pull.  Shortly after the pulling, we set up the bagster, a mini-dumpster that can hold a good hunk of weight without having to rent anything, in the back yard to hold the debris.

We paused to watch Spain beat the crap out of Italy in the Euros.

We spent some time finishing up a good hunk of the dining room wall, clearing debris as we did, and then I started pulling out some of the shiplap in a part of the wall that looked like it once was a door. 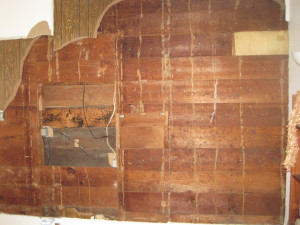 I found some old knob and tube fixtures in there (fortunately no longer in use).
Since there are three days between the Habitat for Humanity people taking away the cabinets and other stuff from the kitchen until David gets back, I'm pretty sure that Graham and I will get most of this wall and the Sheetrock on the walls in the kitchen down before he gets back. We'll also pull the baseboards and trim from around the floors and doors.  We can also see if while David is gone the plumbers and electricians can start the rough ins in the various places that those elements need to go. We started writing on the walls where we thought various electrical outlets needed to be, and we were happy to see that we found the gas line.  There's a pipe that's running up the wall that will have to be moved, and hopefully the plumbers can give a good estimate on the time to move it. I think it's hot water, Graham thinks it might be gas.  We'll see...

At any rate, I suspect that most of my 4th of July will be spent taking down old wood and ripping out not-as-old Sheetrock. 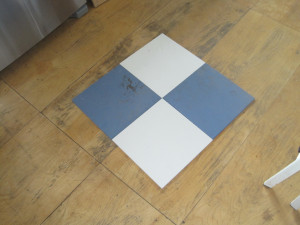 This is the checkerboard pattern that we will have on the floor. I love the two colors. The bleach killed EVERYTHING.  I think we might pour it on the whole floor before we start tiling just to be on the safe side. I put my fist through the wall behind the counter to see if it was just Sheetrock or if we had another structural issue to deal with.
Just Sheetrock.
I suspect that sooner or later we're going to run into some major problem, but so far, nothing unexpected has shown up. Very surprising....
Collapse