I'm beginning to process everything, and I thought I'd give the first of the post-wedding updates with a little more detail.

Everything started on Tuesday, when Graham's mom arrived. My mom was already up at the ranch with Celosa, our dog, and Zapata, her dog. And my sister from California and her dog, Chicken, went up on Monday with a bunch of stuff.

I took the day off, and we ran errands. I first took my car into the shop for its 90 day checkup, and while I was waiting for them to go over everything, I sat in the lobby and constructed my veil with a 4" metal comb and some ribbons. My veil took EXACTLY the amount of time it took them to go through my car. I stopped at Home Depot for some light bulbs and chalkboard spray paint, and then to Target for some diet coke and to find an extra camera battery (which they turned out not to have). And then I met Graham, who had been getting a haircut, for lunch at Cafe Express.

That evening, I walked to spin class while Graham took the car to pick up his mother from the airport.

Graham cooked his famous roast chicken on Tuesday night, and my dad and my sister came over to kick off festivities. It's possible that we drank four bottles of wine that night, including a bottle of Crianza that Graham's mom had put a special label on with a picture of our sweet Crianza, who we lost a little over a year ago.

Graham got up EARLY to pick up the sound system for the wedding ceremony and dance floor at LD systems.

I started at 10:00 a.m. at Parkview Nails to get a manicure and pedicure. I probably unwisely also asked for a lip wax. Unwisely, because I ended up getting a bunch of zits later, and I NEVER get zits. Oh, well, easily hidden.

Next, I headed over to Timberline to get a massage from my friend Tom. It was heavenly.

After that, I threw random clothes in my backpack (having left other stuff at the ranch the weekend before) and went through my detailed packing list. (I kept probably six separate lists on Evernote to keep track of wedding related stuff, including a packing list.) After checking to see if we remembered the rings for the hundredth time, Graham, his mom and I packed all of our crap into the car, leaving a little tiny bit of room for my uncle's stuff.

Before we left to pick my uncle up from the airport, though, we stopped at the hospital to see my great-aunt Ana. Tia Ana is my grandfather's sister, and she is the matriarch of my family. As recently as a month ago, she was raring to go to the wedding, but she had some health set backs--including a stroke--in the last few weeks, and there was just no way to go. She'd met my mother-in-law back in 2008, when she and Graham's late-stepfather had come through. When we walked into the hospital room, though, she perked up and spent a few minutes chatting with us. We promised to bring her pictures of the wedding afterwards.

We stopped at McDonalds for a quick lunch, and then checked my uncle's flight status. 30 minutes early!! We were able to get to the airport just in the nick of time. Graham asked me if I thought I'd recognize him, since it'd been 20 years or so since I'd seen him. Not a problem in any way, shape or form. My uncle's stuff barely fit in with all of the other crap.

Off to the ranch!! The ride was fairly peaceful, and it was great talking to my uncle and Graham's mom. We stopped at a local chain for fried chicken when we got to Brenham, and then we got to the ranch with plenty of day light left. Liv and my mom and the dogs were delighted to see us.

We showed everyone around the house, and sort of showed how the whole wedding was supposed to work out. Graham got his mom situated into a smaller house right by the main house, and my mom got my uncle into one of the bedrooms. And shortly after we arrived, the tables and chairs got there. Graham, my mom and my uncle got them unloaded, and Graham started thinking about how he wanted them arranged. We chatted for awhile, and then sat down to eat, with lots of happy puppy dogs asking for chicken morsels.

Graham and I had slept in one of the bedrooms in the main house, but tonight we'd be moving to another house on the property, where the rehearsal dinner would be. So we packed up when we got up, and Graham took our stuff to the other house.

I called Claudia with a list of the things I forgot, including shirts and jog bras, as well as a 100 foot extension cord.

Graham's mom wanted to get a present for my mom, so she and I went on an excursion to the Antique Rose Emporium, which was about 40 miles away. We took the scenic La Bahia Road to get there, and the wildflowers were just outstanding. We spent maybe 45 minutes there, wandering through the gardens, and ultimately, we ended up with a Mock Orange for my mom.

While we were gone, Graham set up the lights.

Jose and Claudia arrived shortly after we got back to the ranch, and then my dad and my aunt and our good friend Carmen.

At some point in here, Graham spent time arranging the tables, and then Claudia and I helped rearrange them and put the chairs in place.

I also worked on the backdrop for the photo booth. We'd had a bit of a snafu when we'd ordered the invitations, and somehow we ended up with twice as many as we needed. So I turned a good hunk of the remainders into garlands, which I hung from a piece of wood. 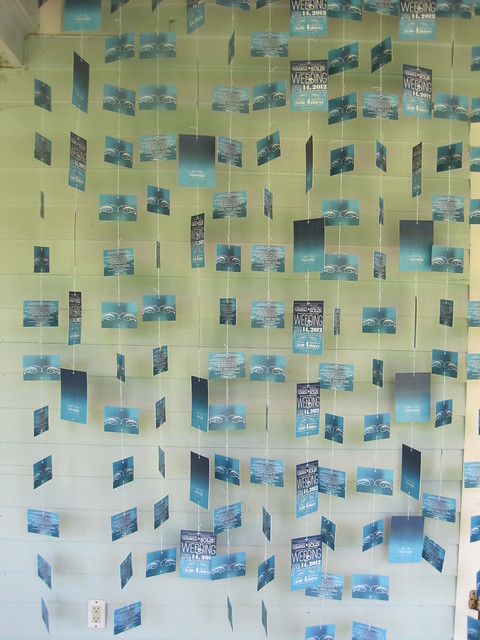 At some point, my mom asked me to help Zapata get a bit of a haircut. He was covered in cockle burrs, and it was easier to trim than it was to get them all out. He wasn't exactly thrilled, but he wasn't upset either. I think he was pretty happy with the result, though he would never confess to such a thing in public. Celosa and Chicken watched nervously, but Celosa only got her face trimmed later on in the weekend.

Finally, towards the end of the afternoon, we all gathered by the tables and chairs just to chat and relax. Liv went on a run. We drank beer. The pooches chased balls and each other. Gris the cat made an appearance. And so did our officiant, Smash.

Then, someone heard what sounded like a truck. And for the first time in 30 years, a UPS truck came barreling up the half-mile driveway and dropped off a package addressed to Graham. WTF???

It was from his dad! A poster sized picture of Graham from his senior year of high school when he was a punter on the football team. Uniform, pads, surly face, vaguely kicker's pose. It was AWESOME. And the setting couldn't have been more perfect than with every single member of the family there to watch. One of the highlights of the week.

My uncle then gave his lovely gift: A collection of coins from various points in history for various family members. It was quite extensive and quite personal.

My godfather showed up, and we all sat down to eat Graham's amazing pasta. Awesome.

Smash, Millie, Celosa and I went to the other house while Graham waited for his aunt, the last of the Thursday arrivals to get to the ranch. I fell asleep pretty quickly.

Sorry for your friendslists, everyone. I thought that if I posted with the backdates, they'd appear where they were dated on your feeds. That's how they were showing up on my own feed.

These are all my wedding posts that I kept off of my main journal and put on an offbeat bride journal. I didn't want to spoil anything for those going to the wedding, but now I really want to save them in my own journal...
Collapse