My most favorite DIY project is finished!! 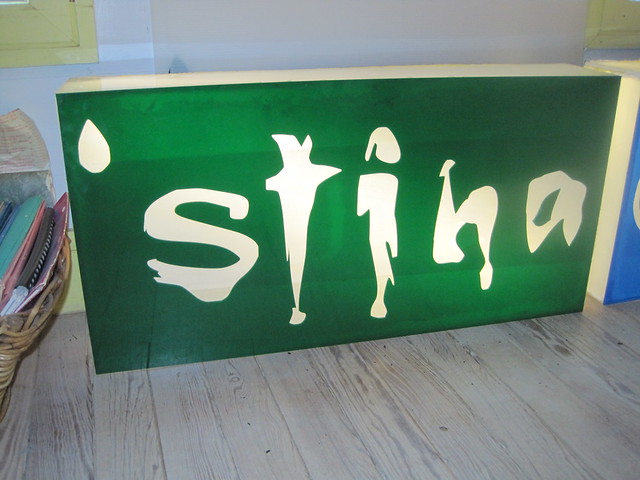 I don't know what gave me the idea or why I decided to do this, but this is one of the DIY projects for my wedding that I'm most proud of.

I made two light boxes with our names on them out of plexiglass.

All in all, it was a relatively simple thing to do, but it was  a little pricey, and it required me doing a ton of things I'd never done before.

First, I needed to find a service provider who could help with materials.  I did a bit of searching for a laser cutter, and I stumbled upon Ponoko, which is a company that executes your 2D and 3D designs.  They have a pretty good selection of materials and they will laser cut your designs for you.   I then had to teach myself how to draw using Inkscape (an open source graphics program) with the parameters set by the laser cutter.  That took a little while, since I'm not a graphic designer and have never used programs like Illustrator or Draw.  What I really liked about Ponoko was that I could upload my design and get a price quote instantly. I learned really fast to eliminate any extraneous lines in my design to ensure that I used as little laser time as possible, since Ponoko charges by laser time.

Going through all of the materials that Ponoko offers, I decided that the fronts of my light boxes would be acrylic, and I picked out two colors that went with my peacock colors. They were .118 inches thick, and I decided to go with the largest size that they offered, which was a little over 30 inches by a little over 15 inches.

I then started hunting for fonts.  I wanted fonts that worked with our personalities and interests.  I decided to use one called Rebuffed for my own name, since the Buffy the Vampire Slayer was so important to me and a good hunk of my closest friends met on the official posting board back in the late 90s.  I used a font called Grouser for Graham because he's been DJing with in a revisited 1920s-40s style called Electroswing for the last year or so, and I wanted something that was somewhat Art Deco-y for him. I liked this particular font because it meant that I could keep the middle of the "A"s without too much extra gluing.  Graham did point out later that if we are generally "Glitter and Doom" (the name of a Tom Waits tour that we thought was particularly applicable to us), he's usually "Doom" and I'm usually "Glitter" but with the signs, we are reversed.  That's perfectly ok.

After I placed the Ponoko order, I started thinking about the materials for the rest of the box.  At first, I thought I'd build something out of wood, so just the front would glow.  But then I thought a little more about it, and I decided that I'd look for frosted plexiglass so the whole box would stand out.  It was a frustrating search, as I couldn't source any locally.  However I did find a company online called Eplastics, and they had exactly what I was looking for. And even better, they could cut it for me!  I decided to order .250 inch white plexiglass with about 35% light transmission, since they said that's what is generally used in light boxes for photography studios.  I think I probably could have gotten away with a little thinner plexi, but I know this is going to hold for a long time.

The last major material purchases were at IKEA and Home Depot.  I bought an LED lighting strip at IKEA.  I thought about maybe getting one of the color changing strips, but since the acrylic for the front was colored, I didn't think that any other colors would look good.  Plus this particular strip was $15.  I went to Home Depot for some MDF (I'm pretty sure the one I used was 1/8 inch thick, not 1/4 inch)  for the back of the boxes and some white spray paint to make the MDF blend better with the rest of the box.   I also stopped at my local art supply store for a roll of 12" vellum.

I think it's totally worth it.

My mom and I went to the ranch this weekend for the next to last trip before the wedding.  We had tons of work to do, but we've done tons.  I think everything is going to go perfectly.

Almost all of my DIY projects are done.  I have:

All of these things are stored in my bedroom at the ranch.  The room looks like an explosion of peacock color, with the hundreds of pieces of paper in various shades of blue, green and purple with a little yellow thrown in here and there,  folded and cut and curled into different shapes and sizes.  The only thing I have left to do is to make a backdrop for the photo booth with the leftover invitations, RSVP cards and inserts.   I think I can finish that tomorrow night.  I also want to make a piece of jewelry for myself for the wedding.  I have all the materials and I think I can come up with the time to do it.

In addition, my dad has grown about 60 flowering plants in little aluminum pots to put on each table.  My mom has done tons and tons of gardening.  I have weeded and mulched and pruned.  My mom has also totally redone a house on the property, including rehabbing old furniture and gardening.

This weekend, my mom and I moved furniture, spent time in the garden, and came up with the final list of things we need to do before the wedding.  Between now and then, I think there is only three days that people won't be up there getting ready. My parents are going up for Easter on Thursday, and my mom will stay until after the wedding.  I'm driving up on Friday, coming back on Sunday, and then going back on Wednesday.  Graham is going up tomorrow with the drinks and the lighting.

I also started stressing about the weather.  There are 15 day forecasts available on Accuweather.  On Saturday, it said it'd rain a little on my wedding day. On Sunday, it said clouds but cool. Today it says sunny.  I'm hoping the progression is towards what will happen instead of just a hodgepodge of weather predictions. If today's forecast turns out to be the true one, I'll be very happy indeed.  We could move things inside if we absolutely had to, but it'd be so much better to be outside.

My photographer is my cousin, and she called last week to confirm everything.  I'm terribly excited about the pictures, and I think that she has a very good idea of what we want for the wedding.  Also, I arranged for a photo shoot with our good friend Pixie, who is going to be shooting a belly dance convention in Austin two months after the wedding.  It will sort of be a reverse engagement shoot.  She did an amazing photo shoot of us three years ago, so I know it'll be awesome.
( Collapse )