So when we got engaged, we were at the very, very beginning of one of the worst droughts in recorded Texas history.  It hadn't rained at all in the month of April, and February and March hadn't been much better.

As the months wore on, it got worse. The lakes were ridiculously low. Grass wasn't growing. My parents had to sell a good hunk of the cattle herd because there wasn't enough hay produced. In the fall, when we started getting a little rain, the weather forecasters started warning that La Nina, which had caused the drought of 2011, was likely to persist into a second year, and the drought could go on.

To say we were nervous about the weather was an understatement.

And then in December, we got about five inches of rain. And January, we got about six, rounding out the month with a tornado. And February had so much rain in one sitting that it flooded the lake.  The island that we could drive to two months previously was nearly covered over entirely with water.

In December, I hopefully started spreading rye grass seed in the area where I planned to hold the ceremony.  Given how dry it was previously, I hadn't been holding out that much hope, but my goodness it has taken! 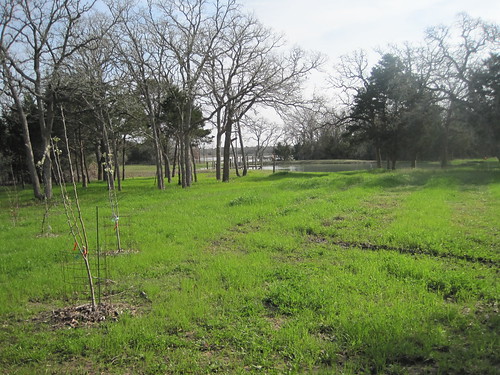 This was two weeks ago. Green green grass. The pond next to the clearing is overflowing, and the fruit trees have taken off.  I had originally thought that I wouldn't want this grass cut before the wedding, but I quickly reconsidered when I saw it. This picture was taken the day after the insane rain.