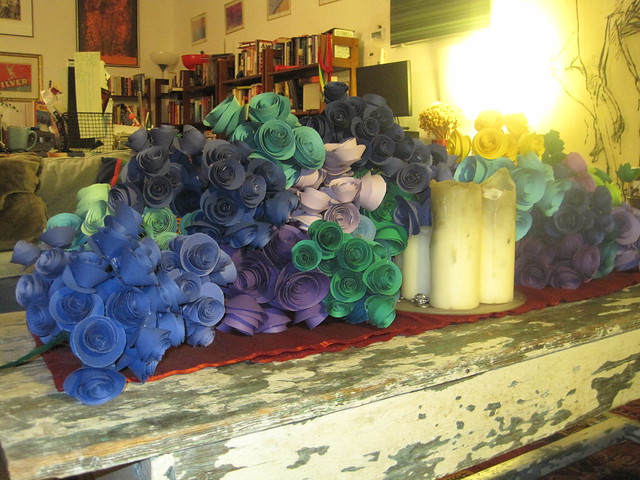 I'm so excited I got another DIY project done that I thought I'd post pictures of the finished flowers and show you all how I did them.

The DAY I finished my Kusudama flowers two weeks ago, I went to my local art store (literally a block from my house), and I bought 70 12"x12" sheets of cardstock in the blue and green, which I then cut into 280 6"x6" sheets using the paper cutter at work. I also bought a 200 sheet multi pack of 8x8 cardstock, of which I used probably 140 sheets. I also bought 50 sheets of purple construction paper, which I cut into 9"x9" sheets. And later on, I bought two packs of 50 sheet multi colored cardstock (similar to these, but in peacock colors), which I used 80 8.5"x8.5"sheets. (The unused stock didn't go with my color schemes, so I'll probably make more flowers later to give to my mom and sisters if for some reason we don't have any left over after the wedding.) So I guess, it's about  550 flowers.

I had seen these flowers around on pinterest and on other sites, and I thought they looked a) pretty, and b) fairly easy to make.  Both turned out to be the case.  It was pretty easy, and I got into a rhythm pretty easily.  It took me about two weeks from start to finish, stopping at Michaels for cardstock and wire at about halfway through.

I'll use these on my tables. Half will get the Kusudama flowers, and the other half will get these, with some lavender sprigs, in glass vases.  I don't think I could be happier with the results.  I'm thinking that the arrangements of these flowers will be in multicolored bouquets.  But I separated them currently according to color.  I have a large rubbermaid bin that I'll store them in until the wedding. 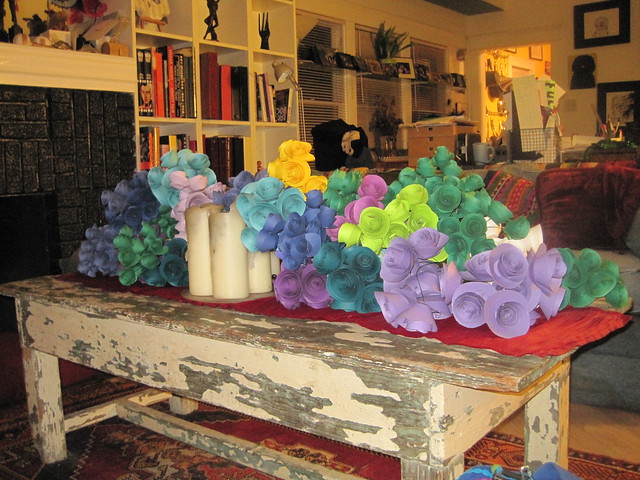 ( Collapse )And they're done! I'm keeping them in a large rubbermaid bin for transport and so they don't get crushed.  I am hopeful that my guests will take some with them!
Collapse