Last weekend, I drove up to San Antonio to see my good friend Cynthia, who is officiating our wedding. She knows us both well, and she takes our relationship seriously. She's also very thoughtful and has great ideas, plus she's the most likely of all of our friends to go to a church on a regular basis. And while church isn't something we're particularly interested in, we do have the sense that what we're getting ourselves into here is sacred. Asking someone we love who takes the sacred seriously seemed appropriate.

I asked her if she'd ever officiated a wedding before, and she said no. I had a couple of pointers for her, because I'd done one a few years back.

I officiated an informal wedding a few years ago. Texas is one of two states, I think, that allows for common law marriage, which is a hold over from frontier days when it was quite possible that you wouldn't see an "official" officiant for months. Being asked to do it was one of the greater honors of my life. I'd been in weddings before, but I'd never actually done anything particularly useful or as important as actually performing the ceremony.

My friends asked me to do it in part because I'm a 9th generation Texan, in part because I'm a lawyer and understand and can explain this quirky little law, and in part because, well, they are close friends and wanted the ceremony to be as personal as possible. They actually had three ceremonies to reflect the three elements of common law marriage. One that was private with just the two of them (agree to be married). One was at their house with just family and the other officiant (and me!) (live together in the state of Texas). And the last one, the one I did, was at a nice little venue with a tiny pretty church and a reception area in front of all of their collected friends and family (hold yourself out to be married to the public.) For all intents and purposes, regardless of how the wedding was registered down at the courthouse, it was a "real" wedding that I officiated. They didn't technically need anyone but each other to make the marriage happen legally, but since they invited everyone to a wedding ceremony officiated by me, it was a wedding ceremony. Everyone who was there will remember it as their wedding.

Two days before the wedding, I lost my voice, and it never really recovered until a week later. Fortunately, the illness had passed, and I was just hoarse, not incapacitated.

The first thing to note is that so long as you look like you know what you're doing, people will believe that you do. I had a few people ask if I was nervous because they couldn't hear me, but otherwise, no one questioned my authority to stand up in front of everyone and tell them that my friends were now married. People in large groups or crowds generally look for direction, and the person officiating the wedding is the person who gives them direction. Confidence is key here. The officiant is the person who gives cues about when things start, when to stand, when to sit.

The second thing is though there are a lot of people watching and they are as much part of the ceremony as any of the wedding party, the really important ones are the two people standing in front of you. As mentioned before, I was barely audible past the first row or two. But I was able to talk to my friends and lead them through the various elements of the ceremony. I focused my attention on them, only looking up at the crowd when I needed to give them instruction or to address them directly. At times during the short ceremony, it felt like the three of us were the only ones there. It can be a very intimate moment, and you should be prepared for that.

The third thing is that you as the officiant have some license to insert something of yourself into the ceremony. This may be appropriate or it may not. Talk with the couple about this and get a sense of what they want. In this case, my story, who I am, and what my history is played a large role in my being the officiant. So I talked a little about that a little to give context. My officiant is inserting a little of herself into our ceremony as well. She's choosing a love poem to read, and she's inserting a rose exchange into the ceremony that she thinks is special. At another wedding I remember well, the friend officiant wore monkey feet, pulled his ceremony script out of Alice's Adventures in Wonderland, and started the ceremony with the famous "Maw-age" line from the Princess Bride. Our friend-officiants are chosen because we want them for themselves, and their personalities will and should come out during the ceremony.

Finally, even if you don't know what you're doing at first, work with the couple on a structure for the ceremony. Start with the basic idea that each party has to voice their agreement to be married and figure out how that works. Could be a directed vow ("repeat after me: I promise blah blah blah"), could be written out vows, could be "Do you...?". Discuss what they want and at what point in the ceremony they want it. (My fiance sort of wants it to be "Do you?" "I do." "Do you? "I do." "You're married!" I think it's going to be a little longer than that...) Then think about other aspects of the ceremony that the couple wants. Ring exchange? Sing-a-long? Readings? Unity candle/sand/rope/broom/pouring of libations? Work out exactly how that works and what role the officiant plays in those things. We will have no one else involved (except maybe our dog) in the ceremony itself, so all the heavy lifting goes on our officiant. In the ceremony I performed, there was a bell that I had to ring at some point. Find out what's critically important to get exactly right and what you can interpret a little. Then write out a script, because you, like the rest of the crowd, need direction too. I'm an extemporaneous speaker, and I knew exactly what I wanted to say, but I still needed a structure to work from. I didn't read off of anything for the ceremony that I did, but the officiant from the other ceremony did. It's a personal choice on the part of the officiant, and almost all if they're first time officiants will be nervous.

My officiant has roughly worked out that our script will be :

We might monkey around a little with it to include a more formal procession and a less formal interaction with the kids, but I don't see the structure changing all that much.

And have fun! This is an amazing thing to be asked to do, but it's also joyous. I'd been in plenty of weddings before I'd been asked to officiate one, and I was truly honored that my friends thought so highly of me to ask me to be part of something so important. I took it very seriously, but it was also an awesome, wonderful, happy thing to do. I loved every second of it, even though no one else could hear me.

After the various hiccups with the invitations, they finally all arrived.  And now, they're assembled, stuffed, stamped and addressed and ready to go to the post office in the morning.

Stamping was a bit of a challenge, only because I tried to go to the post office at lunch to pick up the stamps for the invitations. Unfortunately, the post office I went to didn't have one of those self mailing machines, so everyone who went had to stand in line.  There were eight people in line ahead of me, and the two people at the counters were dealing with complicated issues (a passport application and a large package that required lots of tape and all sorts of forms). After standing in line for 15 minutes with no movement, I gave up, grabbed some take out lunch, and then headed to my home post office about four miles away.  Ten minutes later I was out of there with 12 sheets of "Garden of Love" stamps and two sheets of "Love" stamps (I bought them out of the former...).

Graham went across town to pick up the extra invitations and RSVP envelopes, and we met up and stuffed at home until he had to go to work.

I finished up, rearranged the envelopes according to ZIP code, and double checked that we had everything.

You can see these pictures on my flickr set as well, and it might be easier to see detail. 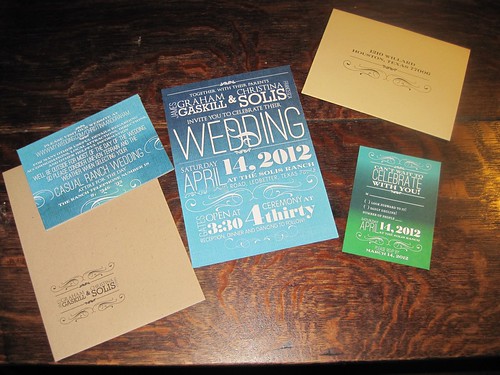 The set.  We had originally wanted to go with a postcard, but it turned out to be a little too small.  So we had to get envelopes instead.  The large envelopes were from my mom, who had over bought a few years ago.  We actually used them as the starting point on this whole project.

The whole ensemble was just at 2 ounces, and we put two forever stamps on each to ensure that postage would be adequate.
Collapse