In my earlier post, I mentioned that I spent most of my weekend folding Kusudama flowers.  I finished the first phase of the project tonight!! 80 flowers in four different colors using 400 pieces of paper.  The colors for these were light blue, blue violet, blue green and green. Blue green and green are very similar. 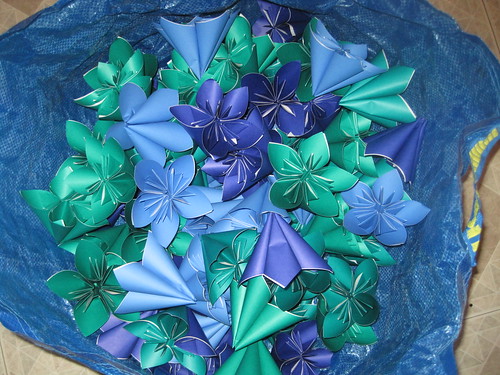 Since this didn't take me nearly as long as I thought it would, I went ahead and ordered another 400 pieces of paper in complementary colors (light green, mango yellow, light purple and another blue violet).  My wedding colors are more or less peacock colors, and I figured these would go pretty well with the rest of the scheme.  Since these are likely to be in the same area (if not on top of) some sari material with bright patterns, I decided to use solid paper in lieu of anything patterned or textured.

I started by folding and gluing each individual petal (I used this tutorial, but there are plenty others on the web), but I later found that I was more efficient at folding everything first, then gluing the petals closed in a second phase of the project, and finally putting five petals together into a single flower in the last phase.

The massive IKEA bag works really well for holding the flowers together without constraining them so much to crush them. I just need to make sure now that my dog and/or fiance and/or I don't step and/or sit and/or otherwise crush them between now and the wedding. 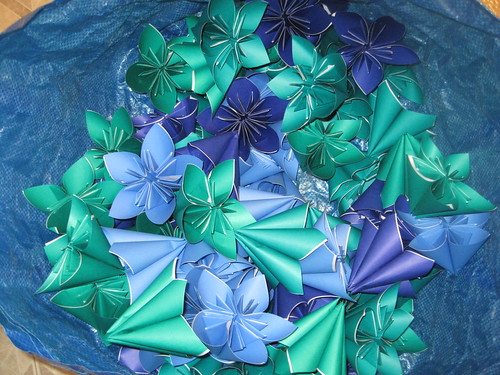 After I finish the next 80 flowers, I'll glue on some sort of center for each flower to hide the edges. I'm guessing that I'll end up using buttons, since they seem the easiest  round thing to find.  My guess is that I'll use a hot glue gun instead of the glue stick for better results because the buttons are going to be a different material and may not stick as well with the glue stick.

Then I'll start assembling the flowers into clusters of seven or eight.  Since I'm not planning in making the full ball, I won't have to use as many flowers for each cluster.  These will end up either as part of the centerpieces of each table (right now we are thinking about 20), or scattered around the venue to bring some continuity between several different locations within the venue.

I had marked in my to do list that this project was supposed to be finished in March, because I thought that it'd take me forever to fold so may flower petals, but I'm pretty sure now that it should be done by Valentine's day.

And while I wait for the next batch of paper to come in, I can go back to working on the project I started earlier in the month: fabric banners.  I started the project in November by picking out the fabrics at JoAnns. This was actually the biggest first step in my wedding planning, because it meant that I was committing myself to a color scheme. All other color choices have been made off of these three fabric colors, and I carry swatches around with me when I'm looking for other wedding stuff. 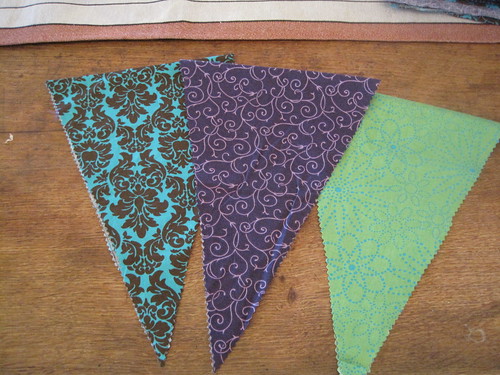 The fabrics were about $5 a yard (I think the purple was a little more expensive, but only by a dollar or so). I bought three yards of each (plus another two of the purple and teal).  I started cutting shortly after Christmas.

There are probably easier ways to cut, but I just measured out eight inch marks 12 inches apart, connected the lines and started cutting.  (If you go to my Flickr set, you can see more of a step by step of this particular project. I'll add to the set as I continue to work on this and other craft projects for the wedding.) I used pinking shears so I didn't end up fraying the edges, and it took me about a weekend to get all 129 diamonds cut.

So my next part of this project is to iron the diamonds to make the triangles as flush as possible, and then tack sew the corners to the colored twine that I found at BHLDN (btw, Save-On-Crafts has it for much, much cheaper) .  I'll also tack the tips together.  This is likely going to be mainly trial and error until I get the hang of it, but I'm hopeful that my sewing machine can make this go pretty smoothly.

My intention is to reuse the fabric after the wedding to make a harlequin patterned quilt, so I don't want to sew the fabric too much. After the wedding, I'll pull out the tacks, wash the fabric, and then sew it together for the quilt.   I think it's going to take me awhile to iron and sew all of the triangles, but after the success of the origami project, I'm hopeful I can find a rhythm here.