So I wander onto my Flickr account last night to upload the puppies' latest photo shoot, and I come across a note someone left on one of my photos five days ago.

This picutre was taken two years ago at Burning Man on Tutu Tuesday. I make no judgment, I make no editorial comment. I simply title the photo "Men in tutus" and caption it with the people in the photo. 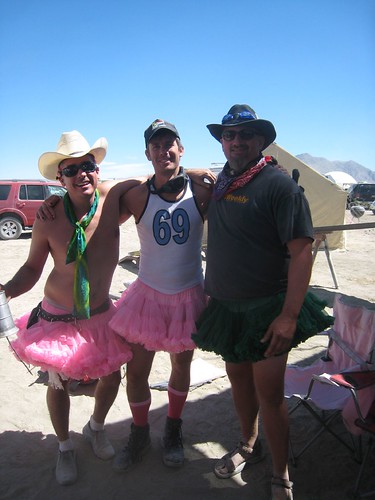 My commenter seemed a bit peeved about the photograph.

Not to split hairs, but IMO "petticoats" are a more precise term here. I will agree with no one that they are "dressed like women" because fairplay is in order---people stopped saying women in pants were "dressed like men" a couple of generations ago. Had it not been for factory work in WW2 putting 17 million US women into pants, I assure you in complete seriousness, women in pants would today STILL be slandered as "transvestites." These 3 are presenting as men therefore, they are not "transvestites." Don't forget we're all still born naked.

Ignoring the gender issues, I zoomed in on the terminology in my reply.

Um, it was tutu Tuesday at Burning Man. For the purposes of this photo, those are tutus. Sorry.

But I became curious. And I told the person I was chatting with at the time about the communication.

me: some random person decided to get political on a picture in flickr
here.
liv: interesting
me: I didn't think i had made any gender statements in my post or my caption
liv: i assume you checked out his profile?
http://www.flickr.com/photos/skirts365plusmore/
it's quite personal to him
me: i know!
but he needed to pick on someone else
i made no gender statements
and in fact i hang out with quite a few people who own and wear utilikilts in their daily lives
liv: yes, he seems insecure about his image

liv: how did he find you? a search for men in tutus i assume?
me: no idea
that's my guess
i think he was wrong, too.
i know that there were victorian women starting the trousers trend
liv: christina, he seems a bit unhinged
i think you shouldn't be too concerned about his correctness or logic (ed note: this is my favorite comment on the whole exchange and possibly on the best advice for dealing with weirdos on the internet EVER.)
me: probably true
though i'm still a little mystified why mine was the photo he needed to comment on
liv: well, it's the first one that pops up in a search
http://www.flickr.com/search/?q=men%20in%20tutus&w=all
me: check out his comment on this one http://www.flickr.com/photos/9817122@N05/3702317298/ *
livs: yes, i don't think he was singling you out
me: it's an interesting crusade
livsolis: it seems like he should wear it as a sandwich board except it would hide his skirts

I'm certain that I didn't find all of his commentary, and I hope he's able to convince the random flickr users to reconsider their men-in-skirts stances and feels better that he's corrected the longheld beliefs of dozens of people. Mine really didn't need much altering on this particular point. As I said before, the Utilikilt is pretty stanard fare in the circles I hang, not to mention the occasional sarong and regular kilt. But I don't think I'm going to be lending this guy any of my tutus or petticoats. He'd probably not give them back.

*"He isn't "cross-dressed," because he isn't wearing anything which by configuration interfaces only with female anatomy. Anatomy is the criteria---not convention and "we do it because we do it." As late as 1958 psychologist Horace English was still calling trousered women transvestites. Bad "reasoning;" all are born naked--individual choice should be the standard, not majority demands. T-O-L-E-R-A-N-C-E for peaceful nonconformity, please."

**"Gee there always has to be negativity re a man wearing something "female" everyone becomes a member of the Gender Police. At the same time no concern is expressed on what the female wears. But there USED to be concern! The NY Times is full of incidents of women in pants arrested, ejected from churches, barred from restaurants & schools etc. What finally liberated women to wear pants? Was it that PSYCHIATRY relented its attempts to validate majority prejudice? No, it was WW2 factory work that put 17 million women into pants. Social forces freed women from slavery to skirts. Petticoat Society, you say??"

***"Probably humor was their motive. They are not "cross-dressed" because where is the conflict with anatomy? Both sexes STILL have a waist & legs. Women have alternatives (pants) attempts to stop men from having choices take place because many people are unjust."

****"Sure enough, it's a tutu. He isn't presenting as a female, so he isn't "transgendered." In 1910 a German psychiatrist coined an unfortunate term, "transvestism" in attempt to equate status quo with biological health. At that time they certainly did apply the term against women in pants. Why don't they do so today? Because women in pants are now a majority element, due to the factory work in WW2, and majorities cannot be persecuted. Calling someone a nasty name to stop them from having choices IS persecution."
Collapse