We woke up on Monday morning a little sad, knowing it was the last day. And with purpose. We had to fit everything we’d acquired over the last four days into our bags. Fortunately, we’d brought a half-empty suitcase, and we’d flown Southwest, so checking bags would not be a problem later. Over the course of the last few days, most of our purchases were clothes. Several tee shirts, my new jacket, my new dress, Graham’s new mask, some patches, a stuffed loth wolf, and a lot of posters. But we got everything to fit without too much of a problem, and we were ready for our last day of Celebration.

I got dressed in my new jacket, an Ahsoka tee shirt I bought at the Celebration store earlier in the week, and the Ahsoka leggings I adore from Her Universe . I also threw on a tiara because dammit, these are all Disney princesses now. And my Docs, because they’re damned comfortable.

Graham wore his Sithlords tee shirt that he got from a company here in Houston during the Star Wars Art Show last year with jeans.

Our flight wasn’t until late, but we knew we were going to have to come back to Wicker Park for our stuff, so we were on an abbreviated schedule. 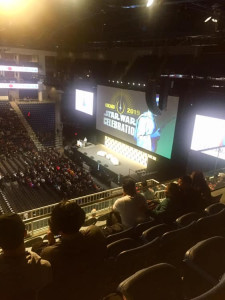 We got to the arena at about 10:00 for the Phantom Menace panel. Graham and I are not the biggest fans of the Phantom Menace, but we got in through the lottery, and we figured it’d be interesting. The panel was split into three parts. The first part was dedicated to the technical components for the Phantom Menace, and at the time, the achievements were pretty remarkable. Tons of technology that we use all the time now was developed so they could make that movie. The four behind-the-scenes artists gave us a great view of how the movie was made and produced.

Next, the Dark side. Ian McDiarmid and Ray Park came on stage and talked about their participation in the movie. They were both charming and in light of recent revelations about both of their characters, intriguing. One thing I thought interesting is that after ROTJ, McDiarmid pestered Lucas about “maybe not dead?” and Lucas was adamant that the Emperor was dead. That was nearly 30 years go, so who knows how much that holds, but it was something interesting to bring up. I’ve never seen Park sit still for that long, but he still exuded pent up energy. One of the things I forgot to mention about the Clone Wars panel from the day before was that Filoni explained that for the Maul fights in the upcoming episodes, they put Park in a motion capture suit. I cannot WAIT to see that.

The light side was composed of Ahmed Best and Anthony Daniels. Like Tran a few days before, Best got a standing ovation and as much support from each individual person in that arena as they could muster. Best had well documented depression following the backlash against Jar-Jar, and to see him welcomed with such love was a joy. Graham and I slipped out after their introductions, in part to avoid the crowd at security when the panel let out, and in part because I wanted to go to a book signing.

I fell in love with Claudia Gray’s writing when I picked up Lost Stars a few years ago. She has just a lovely way of putting forth the galaxy with a unique voice. She’s quickly become one of the fandom’s most beloved writers, and I was upset when the official schedule came out and she was listed as only being available for 30 minutes in the middle of the Clone Wars panel. But when we got to the Del Ray booth the first day, they explained that the authors would be signing every day. I’d missed her most of the other days, so I was determined to catch her on the last day. I’d bought her new book the day before, and when I got to the line, it wasn’t that bad. Everyone was still paying attention to the Phantom Menace panel. Graham went off to find some last minute things, and I spent some lovely time chatting with the people around me. Claudia Gray was a joy and I was overjoyed to be able to tell her how much I admire her writing.

Graham and I went back over to the fan club area to say goodbye to Kareem and to trade with the various groups. We spent nearly 20 minutes chatting with the Pride Squadron, and got a few patches and buttons as everyone was trying to get rid of their swag.

Next was Graham’s turn in the book line for an autograph and chat with Alexander Freed, and while he was doing that I went to the Chewy booth to get presents for Fusilli and Celosa, who had been vacationing with their grandparents at the ranch. I also was looking for other random presents for people.

When Graham and I were reunited, we went to a vendor that I’d been watching since the first day. He had a particularly nice Ahsoka print that really called to me. And finally, with only five left of the run, I went ahead and bought it.

Our shopping done, we checked the time, and headed to a corner of the convention we’d not seen before: Rancho Obi-Wan, which is the home to a massive Star Wars collection. They brought out just a fraction of the items they have, but it was impressive nonetheless. Then, we headed back to the arena across the street for the closing ceremony. 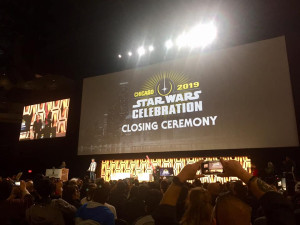 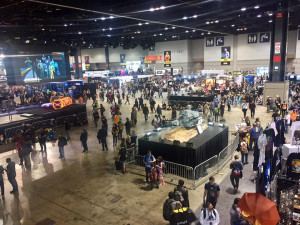 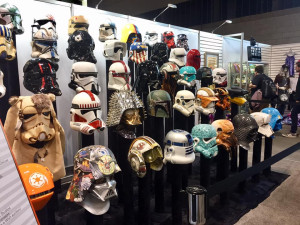 The closing ceremony was nice and full of warm and fuzzies. Warwick Davis was hosting, and it was essentially a recap of what we’d seen over the previous five days. At the end, they announced that the next Celebration would be next year in Anaheim, though the dates are not yet set.

We went back across the street for one last look through and a picture under a tie fighter, and then we headed to the train to begin our journey home. Everything fit, the airport was full of Star Wars fans, and the TSA line wasn’t too bad considering how many times we’d had to go through security in the last five days at Celebration. We settled into our seats and were home by midnight. 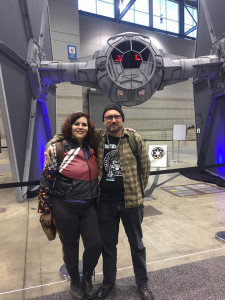 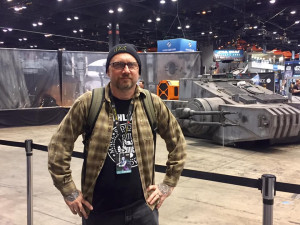