On Sunday, I woke with a gasp. I looked at Graham, smiled, and said, “We’ve been married seven years today!” He grinned and kissed me. I kissed him back.It was a perfect anniversary.

He went and got us coffee while I lingered in bed for a moment or two. He came back with chai and the news that it was snowing!

I thought about my wardrobe and stayed in bed an extra few minutes.

Today, I was gender-bending Lando. I have this awesome wrap top cape thing from Elhoffer Designs (though the top appears no longer to be on their website). And I wore black leggings with my tall black boots. I threw a jewel on my face and made my makeup as femme as I could, because I figured a Lady Lando would be dolled up as much as possible. Under my cape, I wore a cami, and for the purposes of travel to and from, I decided to wear a long sleeved shirt under the cape that I’d take off once I got to the convention center. 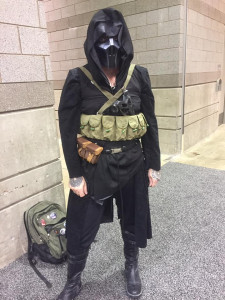 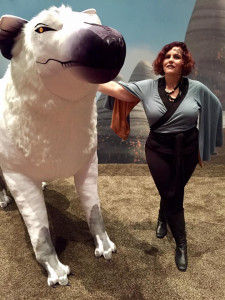 Graham was debuting his own cosplay. He’s always been a fan of the guys on the side, but fighting the good fight. When he was a kid he loved the rank and file rebel troopers on the Tantive IV, the guys in the trenches on Hoth, the scouting group on Endor (now known to include Rex!!). His current favorite Star Wars movie is Rogue One, and he sort of fell in love with the anarchist Partisans that follow Saw Guerra and put pillowcases over blind Force sensitive captives, just in case. So he developed a costume to emulate the look and feel of one of the Partisans without specifying which one in particular. He found an awesome sweater thing on Amazon, an ammo pouch also on Amazon, his tall black boots, some black yoga pants, some goggles from Burning Man, and some greasepaint. At the convention a few days before, we found this awesome mask that completed the look.

So my Lady Lando was accompanied by essentially the Rebel version of Antifa. I fell in love with him all over again and would have married him right on the spot had we not done so seven years previously.

Citing the snow(!), we decided to Uber to the convention on Sunday rather than take the train like we had the previous days. The train itself would have been fine, but the waits at the stations would have been, er, challenging.

We rolled in at around 10:30, giving me time to go to my tattoo artist for a check on the wound and a bandage change. (These new bandages are pretty cool. Look like saran wrap, but adhesive and breathable. And eliminates the need to constantly add lotion all the time.) The tattoo looked great! 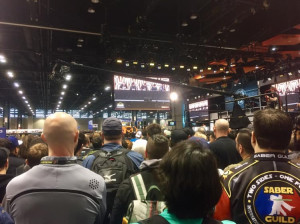 Graham secured us spots to watch the livestream of the Mandalorian panel at the Star Wars Show stage, and pretty much most of the convention stopped what we were doing in order to hang on every word. Man, I can’t wait for that show to start. David Filloni is just an outstanding showrunner, and to be paired with Jon Faverau makes me really excited. The cast seemed really into what they were doing, terribly excited to be there, especially Pedro Pascal. Filloni told a story about the random guys at ILM who were so excited that they started building props and developing shots in their garages. And there was another great story about not having enough stormtrooper armor for one particular scene at the studio, so Filloni called the 501st and got plenty of stormtroopers to show up without even knowing what it was they were doing there. Now they all can say they were in a Star Wars show. The cast said the 501st were DAMNED professional. The livestream cut out before we could see the exclusive footage. But we were pretty happy with what we got to see.

At some point in the previous day, we managed to get a feature of the app working and made a reservation to go to the Celebration Store at 12:30. I had been there two days prior, but Graham hadn’t been in and he wanted to see if there were any other items he wanted. There was a screen printing area, and while he was waiting to get a tee shirt printed, the people in the shop announced a brand new tee shirt for The Rise of Skywalker had just been released. I happened to be standing at exactly the right place, and so I was the very first person to get one. Graham and I swapped places in line so he could get one too. Apparently, they’d only printed 1300, and they were out of them pretty quickly.

I left Graham at the shop to wait for his shirt to print to try to make it into a panel, but it was full by the time I got there, and I took a little time coming back. Once we were reunited, we wandered to the far corner of the convention floor to check out all of the fan groups. There are so many, with so many different interests. I talked to one of the Mandolorian Mercs about what it takes to join in. We had pictures taken with a variety of backdrops the groups had brought it. We gave stickers to any kids we saw. I found another woman wearing the same top I was.

And then we realized we were close to the time to get to the Clone Wars panel. We didn’t look at the location, and almost went to the wrong place. The panel was across the street (through what I am told was not a blizzard but entailed a lot of snow and wind so I’m not entirely clear on the difference) in the big basketball arena. We sat near the press area. And the place was almost full. There were so many people excited about the return of the Clone Wars. For a lot of fans, it was their gateway into Star Wars. There was sooooo much costuming from that part of the franchise. Ahsoka was EVERYWHERE. The cast was just overjoyed to have another chance to be on the show, and it was clear that they all love working together. Filloni was as cagy as ever, but he did show us some amazing clips and gave us some of the development sketches from the show. We were buzzing with excitement to see how everything would wrap up, knowing that this was an amazing gift to get. How often is a tv show revived in order to properly wrap it up? We were given a poster of a still from the teaser trailer, and while standing in line, I swapped one of our posters for someone’s excess Mandolorian poster. Excellent trade. 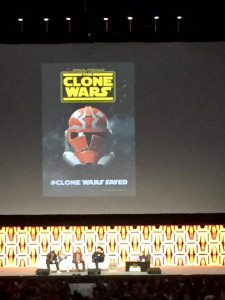 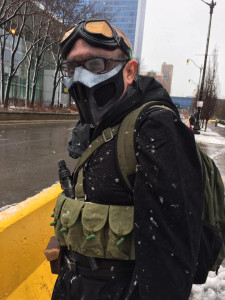 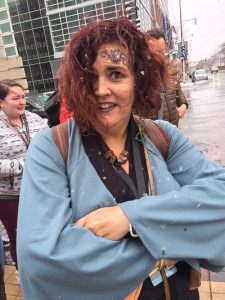 Back at the main floor, having survived going through the blizzard again, we wandered some more, taking everything in. Every now and then we'd see the snow outside, and it added a little more magic to the event. Something different, something mysterious. The Hoth cosplayers were overjoyed.

Finally, we went to our last panel of the day. We misread the description and probably would have walked out had it not been a very public departure. The panel was about COLLECTING original props and costumes, not about displaying and talking about original props and costumes. There was an interesting story about someone having an original Stormtrooper helmet, but otherwise, we probably could have filled our time better

Afterwards, we Ubered home. We had plans to eat at a restaurant near the apartment, but it was closed. So we went to the restaurant on the other side of our apartment. And we had an excellent anniversary. 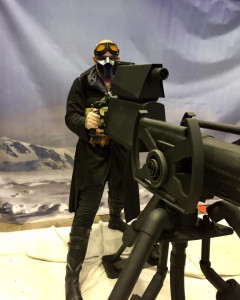 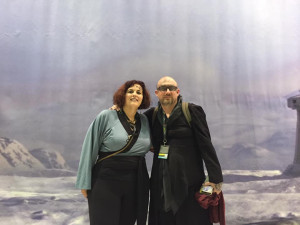 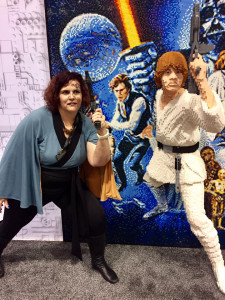