The big panel on Saturday was for the new theme park in the Disney parks. For whatever reason, Graham and I were sort of more interested in learning about that if and when we go to the park than at Celebration. So we took a little more time getting organized on Saturday morning. Graham got some chai and coffee at a nearby donut shop, and we took some time getting dressed. 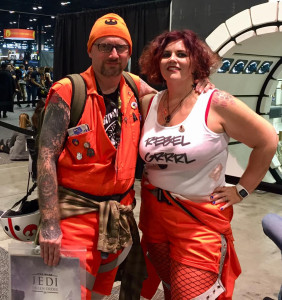 Today was our couple cosplay day. We’d actually been planning this costume for a few months when I was hit with inspiration reading something or another. We were Generation-X-Wing fighter pilots. And we totally went there. We bought orange jumpsuits and then altered them to fit a 90s grunge aesthetic. Graham cut off the sleeves and the pant legs to the knees. I cut my shorts much shorter and hemmed them. I had a white tank top made with the rebel logo and the words “Rebel Grrrl” written on it. I found a motorcycle helmet and decaled it. Graham chose a skater helmet instead. I made flight straps out of grey webbing. For mine, I put grommets every few inches. Graham put hooks on his. I found a pair of old Doc Martens on ebay with plaid lining. Graham found his combat boots. I threw on orange tights and then black fishnets over them. Graham tied a flannel around his waist. I kept the top of my jumpsuit hanging behind my back. I went thick with eyeliner and a dark red lipstick. Graham wore an orange stocking cap with the rebel logo. We looked awesome. The only thing missing was the awesome vintage skateboard we had found, but Graham and I decided that it was more a pain in the ass to bring with us. It’ll come to Comicpalooza.

And of course, it happened to be the day we spent the most time apart.

When we got to Celebration, Graham got in a line for something at the Amazon booth, and I went over to the tattoo pavilion to check on an artist’s availability that I had seen the first day. I’d more or less decided to get a tattoo while at Celebration on Friday. I knew I wanted the Starbird Rebel logo from Rebels in a stylized version. I finally settled on my ribcage. And I had talked to an artist on Thursday that seemed to meet my needs and had a portfolio that I liked.

When I got there, though, I noticed that she was in the middle of a pretty big project that would take some time before she could talk to me, so I looked around a little more. And I found this awesome Starbird that looked even better than the one the artist had I had been talking to had made. The artist was taking walk-ups, and the project he was working on just then was very small. Within 30 minutes, I was on a table getting my tattoo on my left ribcage by a guy wearing a Hutt Slayer (fka Slave Leia) cosplay. It was pretty awesome. The tattoo has watercolor effect in pink and purple, and I am so very much in love with it. 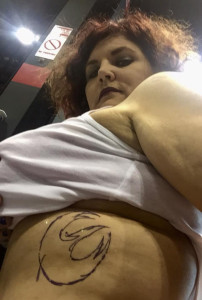 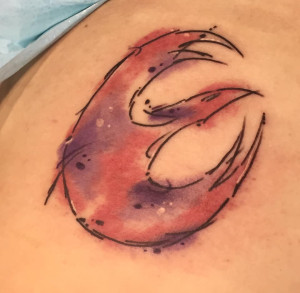 Graham met up with me having had some adventures of his own while I was being tattooed (I made sure to tell him about it via text as it was happening). And we made our way over to the Rebels panel. Due to some awesome pre-planning on our part, we had reserved seats ahead of time, and we were able to pretty much waltz into the panel without having to wait in line at all. The panel was packed, and I was pretty happy about how close we were.

Given I had just gotten a tattoo from the show, I am pretty invested in Rebels. It was a pretty awesome panel because it was the first time I got to see David Filoni, who I think is one of the best Star Wars producers and storytellers out there. Since Rebels is complete, they were able to cover quite a bit territory about the show without giving anything away. The cast had great anecdotes, and clearly enjoyed working together. Filoni is an evil genius who enjoys torturing everyone, including his cast. He keeps EVERYTHING close to the chest and the whole Celebration, everyone was making fun of his “trust tree” where no one is told anything. This panel was a love-fest, and it was clear that Rebels is a beloved, beloved part of the canon now. When the panel was over, we all got a Rebels poster based off of the painting that Sabine made at the end of the series.

Graham actually left the panel a little early to go across the street for the Jedi Fallen Order game preview. He said it was pretty amazing. I went over to the vendors to get a poster tube after the Rebels panel was over, and I was able to see things like the Running of the Hoods  and absorb more of the convention. Around the time that Graham’s panel was getting out, I wandered towards the main entry to wait for him. He got delayed due to the line for the poster/x-box time/pin set swag after the panel, so I got us some hotdogs and spent 20 minutes being charmed to death by an 11 month old fan from the Czech Republic who was delighted to play with the inflatable light saber I gave her. Graham spent his time in line giving stickers to everyone there.

We reunited for a bit, taking more pictures in, wandering around some more. The final panel of the mural was revealed today, so we went to admire it.

Graham and I were parted again pretty quickly. I went to the Sisters of the Force panel that put several of the women of the Star Wars family on stage together, while Graham went to a writing workshop. We both wanted to go to both, but such is the fate of conventions.

The Sisters of the Force panel was wonderful. I was on the floor of the arena, and the place was pretty full. The panelists were just lovely people with wonderful stories. There were tears and laughter and great stories. Having been a part of this fandom for such a long time, it is such a joy to have so many women involved now. Once upon a time, there was just one. And while she’s a bad-ass and my hero and the best damned princess in this or any other galaxy, she was the only one. There are so many more now, so very many more. And they are beloved. There were so many Ahsokas. So many Sabines. Heras. Holdos. Reys. Ventresses. Padmes. It’s just wonderful, and sometimes we need a love fest like this. 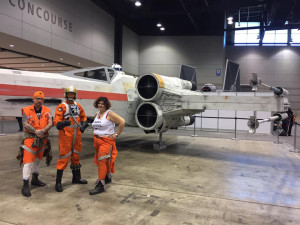 Graham and I reunited shortly after the panel. We made a final sweep through the convention floor, making sure to get a photo or two by the X-Wing, and then we made our way back toward Wicker Park. Our friend Sam was having a birthday party that night, and we wanted to get home and get ready for it. We met up with Jason, our host, and he graciously gave us a lift to the party. It was awesome because we got to chat quite a bit with him on the way there and back.

It was starting to get cold that night, so our time outside by the fire at the party was a little more curtailed than it would have been had the weather been a little kinder. We got home soon before it started snowing.