Obviously, I'm a Star Wars fan. I've been a Star Wars fan ever since I can remember, probably starting in 1979 or 1980, when my family first got a VCR. It was the first movie we rented, and we rented it so often that it was more cost effective to go ahead and buy it. Jose and I knew every single word of dialogue, and we used to play Star Wars all the time. I remember going to the theater for every release since 1980. It's always been important to me.

And fortunately, I met and married someone who loves Star Wars as much as I do.

I can't remember the first time I heard about Celebration. It was quite some time ago, but it wasn't until maybe 2015 or so that I started paying attention enough to think I'd try to go. Last time around, Graham and I talked about it, but we never got our act together, so we watched it on the livestream vowing that one day we would go.

But anyhow, it's been a goal since 2017. We didn't buy tickets when they went on sale last summer. With years of burn events in our past, we knew that the resale market would probably be robust. But we didn't actually pull the trigger until late March, when Graham found a ridiculously low fare to Chicago for $150 each roundtrip.

So we found tickets (without a markup) and our outstandingly awesome friend Jason offered us a place to stay in his house in Wicker Park. And on Thursday, at an absurdly early hour of the morning, we were on our way. 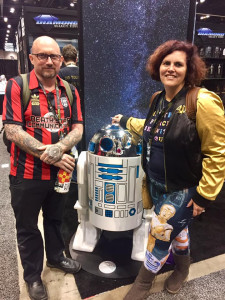 We essentially just dropped off our stuff after we landed (30 minutes early!), grabbed a quick bite to eat, and headed straight to the convention center via the train. I was wearing my droid leggings, my droid satin jacket, my "may the force be with you" tee shirt, and my Rey boots. Graham was wearing his "Death Star Communications" soccer jersey. We looked the part. As would become a custom, we ran into another Celebration attendee on the train (recognized by her Rey boots), and we chatted on the way there. Doors were to open at 1:00, and I think we arrived at about 12:30, so our wait wasn't very long at all. We continued to chat with our new friend while waiting, and as soon as the doors opened, there was a rush.

I had an agenda. I'd deliberately packed with the idea of buying a jacket at Her Universe that had been announced right before the convention started.  I knew on the map where the booth was, so I made a beeline for it. At 1:15, I found the booth, but it took me another five minutes to find the end of the line. I got in it, and I told Graham to explore while I waited.

This was an awesome strategy, as it gave us both an opportunity to take things in at our own pace. I let the convention assemble around me as the line moved slowly ahead. After taking a hard pass on the 8 hour wait on the Celebration Store, Graham went out to get a lay of the land, coming back every ten to 15 minutes to check in on me and tell me what he saw. The line I was standing in was on a main thoroughfare, so I got tons of people watching in, and I chatted with those around me too.

I think it took an hour to get to the front, but it was totally worth it. I got the jacket I wanted, and it was even more awesome than I thought it would be. I also got a dress that I had my eye on. Graham got a tee shirt.

And then we were free to walk around. We didn't know it, but it was a lot less crowded than most of the other days, and not all of the booths were set up yet. But we got a good sense of things. We admired the mural that had been painted for the event. We checked out the art cars and ships and model areas that had been set up. We wandered over to the tattoo area to check out the artists. And as luck would have it, we ran into Cori on the convention floor on the first day. We sort of assumed that she would be so busy we'd never see her. But we got to hang out for a half second before she had to move on.

One of the last minute purchases I made before we left was a pack of a dozen inflatable light sabers to give to kids. Next time we'll bring ten times that amount, because it was so much fun giving them out. We also bought 200 stickers on Amazon to give out. The kids really loved those too.

Graham and I checked out the diorama, which has become a Celebration tradition. A massive model of an iconic scene from Star Wars is built by the community for the duration of the event. This time around, it was the Battle of Scarif from Rogue One.

We left a little early, tired as hell from the travel and stimulation, but really excited about what we saw. Pizza from around the corner, and we were in bed fast asleep by ten. 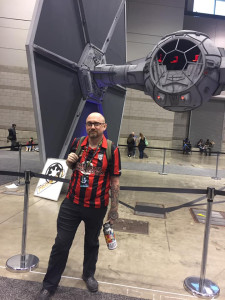