Wherein I stop talking about it and actually do it.

So for a very long time now, going on a decade, I've been harboring the fantasy of an addition to the house.  This fantasy has taken many shapes over the years. I've gone to countless open houses of other bungalows to see what others have done. I've spent a lot of time with tape measures and graph paper. I've talked over a bottle of wine with my (former) architect brother.  (He's still my brother.) I talked to my friend Buttery about putting shipping containers in the back yard.  I dragged my husband nee fiance nee boyfriend through dozens of home improvement websites.   I messed around with an excel spreadsheet at first and then an online site called floorplanner.com.

And there have been substantial improvements, starting with the disco fireplace project, the kitchen remodel extravaganza, and then the recent windows upgrade. But we still have a two bedroom, one bathroom house.  Now with a more funky layout due to closing off a door during the kitchen renovation.

But we don't have that much more space.  Last year, when I got pregnant, we really realized that while the 1940 census reported three adults and two children living in our house, a baby and a single bathroom was going to be extremely cramped.  Also last year, I read an article about some Houston architects, and Graham and I really liked one of the featured designers.  We thought that the excel/floorplanner design that we'd sort of come up with would work with his style, and we started stalking him on his websites and social media.  In September, while I was at a job interview in another city, Graham talked to the architect to determine what steps we need.  First, we'd need financing.

Two and a half years ago, we refinanced the house, and we got an idea of how much it was worth.  But about 6 months ago, Noir's house, which is right across the street from ours, sold at a substantially higher number than the appraisal in 2011.  We weren't shocked, as real estate prices have been going steadily up in our neighborhood at an alarming rate based on the open houses we've seen. But the higher number meant that it was extremely likely that we had enough equity in the house to actually do something towards the addition.

So we decided that after our taxes were done this year, we'd see how much of a HELOC we could get.  I started that process a few weeks ago, and on Tuesday we found out we were approved. We closed this afternoon. 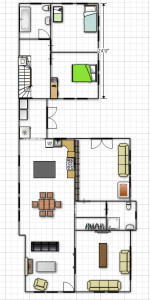 So, as soon as we get the funds, we'll start making appointments with designers and see what we can do with the money we now have.  I suspect that the next few months are going to be extremely stressful, but ridiculously exciting.  I'll get a library, Graham will get a studio.  We'll have plenty of space for a baby and guests and even a parent if it comes down to needing to house family.  I suspect that the design will change several dozen times over the next few months. But we're terribly excited that we can stay where we are but get more space. Storage! More bathrooms!  A real closet! Space for art! An uncluttered living / dining room.  And the damned washer and dryer will finally have a home.
Tags: home improvement
Subscribe